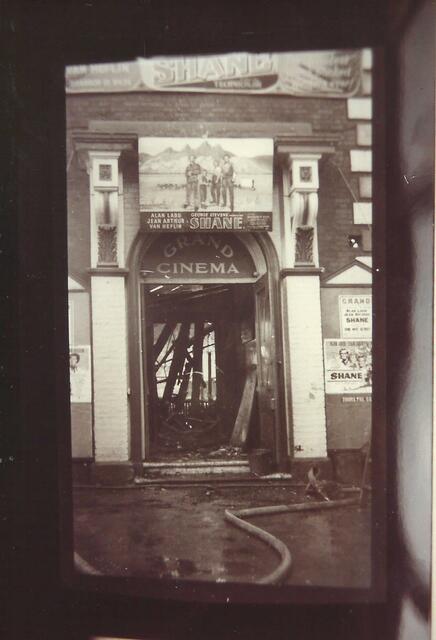 In Huntingdon, Cambridgeshire, the Corn Exchange opened in November 1862. Into the 1900’s the main hall, which measured 65ft by 35ft and had a gallery, was in use for live entertainment. But then, from 1st January 1913, it opened as the Grand Cinema. It was operated by local businessmen the Murkett Brothers and had 500 seats.

The Grand Cinema led an uneventful life until March 1954, when it starred in its own real-life drama when it was engulfed by fire. In one of ‘those’ ironies, one of the films playing that week was “Flaming Feather”, starring Sterling Hayden - the other being Max Bygraves in “Bless ‘Em All”.

The Grand Cinema arose from the ashes on 9th December that same year. The frontage had been saved, but behind it all was modern, with the opportunity being taken to install a new, curved, 18ft by 11ft screen, masked for an aspect ratio of 1.66:1, and a reduced seating capacity of 460, including 160 in the relatively modest balcony (despite the Kinematograph Year Books persisting with 500 seats). The re-opening presentation (in 1.66:1) was “Knock on Wood”, starring Danny Kaye. In an interesting piece of programming, the following week’s attraction was “Shane”, starring Alan Ladd, the film that should have played the week after the fire.

The Grand Cinema closed on Sunday 16th August 1964 with, for that one night only, “The Great Escape”, starring Richard Attenborough and Steve McQueen.

Bingo took over, but only, I gather, until the site could be redeveloped. A Woolworth’s store later occupied the site, I believe following the demolition of the building, rather than moving into the former Corn Exchange/Grand Cinema.