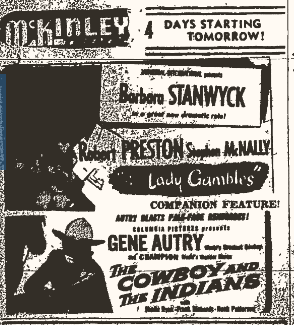 Boxofficeof April 12, 1965 said that the house had closed with a standing-room-only performance and would soon be demolished to make way for a supermarket, but it did not give the date of the event. This was probably a live music performance, as the October 7, 1957 issue of Motion Picture Daily said that the house had been leased from the Robins Amusement Company by Cleveland impresario J. Stutz, who planned to present what the Daily called “hillbilly shows.” It appears that the McKinley spent the last several years of its existence as a country music venue.

One source notes that the Niles Sparkle Market occupies the site of the McKinley Theatre. The market is much larger than the theater was, though, so other buildings must have also been demolished. The market is at 140 N. Main Street, so until we find a more exact source, that’s probably as close as we’ll get to having the theater’s actual address.