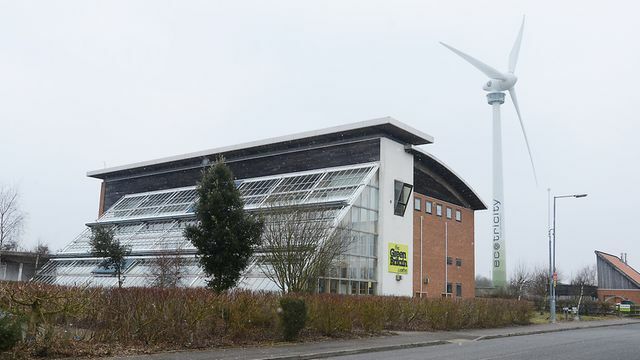 Situated on the main A47 road outside the Norfolk town of Swaffham, the not-for-profit, council-owned EcoTech Centre, best known for its distinctive 220ft wind turbine, was founded in 1999.

In 2008 it was taken over by Dale Vince, owner of green energy firm Ecotricity. In 2012, he renamed it the Green Britain Centre, and expanded its educational remit to include sustainability in food, energy and transport, and offered school trips and event hire.

Unfortunately, Mr Vince was unable to make the project break even, and it was closed in June 2018.

However, in January 2021, it was announced that an “international company” had purchased the Green Britain Centre, so it may well re-open at some time.

The Centre gets its footnote on Cinema Treasures because, back in October 2004, in an attempt to make the Centre even more attractive, it was suggested that a community cinema should be created. This was especially relevant to the town as its previous cinema, the Regal Cinema, had closed way back in 1964 (see separate Cinema Treasures entry).

The cinema was a joint project between the EcoTech Centre and Iceni Partnership, which promotes community activities. It was originally going to be called the Iceni Cinema, but it opened with its slightly awkward name.

The Icenima was opened on Wednesday 2nd February 2005 by actor Bernard Hill. The opening film was “The Bourne Supremacy”, starring Matt Damon. Films were shown, at least initially, on Fridays. There were plans for a cinema club and children’s Saturday matinees.

It is not known how the Icenima progressed, and whether it had ceased operating before the Centre closed.

It is possible that the new owners might decide to re-open it. Assuming, of course, that the Centre does re-open.