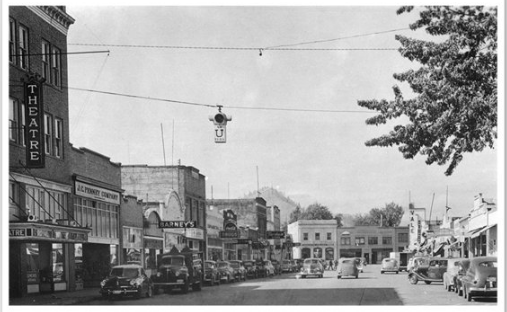 The Royal Theatre was opened by February 1926. It had gone from listings in the 1940 edition of Film Daily Yearbook and reappeared listed as (Closed) in 1941 thru 1943. By 2021 the Agave Azul Mexican Restaurant operates at this address.

Uploaded two photos. One shows the Royal on the immediate left foreground. The second is taken from Division Avenue (with a portion of the Vale in the left foreground) with the painted sign “Royal Theatre” on the right some ways down the block.

The Royal Theatre was mentioned in the July 8, 1927 issue of Motion Picture News. It was then owned by G. C. Fasken.

I have looked at current photos of Cottage Avenue taken from the same Division Avenue vantage point. No signs of the three story building that housed the Royal. Doing some detective work on that.

The Royal Theatre was advertised in the February 11, 1926 issue of the Cashmere Valley Record.

My father, Ted Wilson, worked at the Royal Theatre sometime in the mid-late 1930’s. That’s all I know for sure, but I suspect he had something to do with running the projector. If I remember correctly, I believe Sam Wilson and sons had a machine shop on the same side of the street, on or near the end of the block nearest the Post Office. My mother’s grandfather, Eugene Long, was a part owner of the Big “D” Department Store, which was located on the North side of the street at the opposite end. At some point I was told they converted the store to the Vale theatre. After they were married, my parents moved to Leavenworth, where they owned and ran the Alpine Theatre. - K. Wilson, Bremerton WA

klongwilson: you might be interested in this brief item from the October 1, 1932 issue of Motion Picture Herald: “TED WILSON has taken over management of the Royal Theatre, Cashmere, Wash.”

Leavenworth, Wash.— Reopening of the Alpine was staged with a big ‘open house’ preceding regular show starting at 4:30. Ted Wilson, owner and operator, has expended over $6,000 on remodeling improvements, modernistic front and illuminated marquee. Modern blue and silver trimmings dominate box office appearance, while interior is declared to be an ‘architect’s dream.’“

An item in an earlier issue said that the opening was slated for March 12.

I see we don’t have a Cinema Treasures page for the Alpine Theatre at Leavenworth. I’ll try to dig up more about it and submit it. All I’ve found so far is that it was at 907 Front Street and was still open at least as late as 1972. I can’t tell if the building now on that site is the theater’s or not. If it is, it has been substantially altered.

Judy Garland and her family played on that stage there back in 1926.