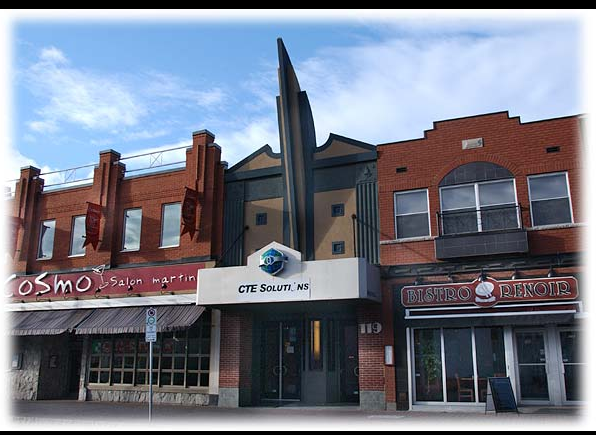 Built by the Interprovincial Theatres Ltd. of Toronto. The single-screen, 930-seat Cartier Theatre opened its doors on March 25, 1937 with Sonja Henie in “One In A Million” along with Walt Disney’s Silly Symphony “Mother Pluto”, a novelty “Torture Money”, and a special local attraction “Progressive Hull”, a film all about the city of Hull. The narrow entrance betrayed the magnificence once you entered: a large lobby with a marble staircase and crystal chandeliers, and a curved mirrored auditorium with thick carpeting and other rich appointments.

The Cartier Theatre was sold to Famous Players on August 18, 1937 and they operated the theatre that not only showed movies, but also for special events and concerts as well. Except for Thursday evenings, the bulk of the movies screened here were in English, rather than the local French. The theatre benefited by being adjacent to Ottawa Province where movies could not be shown on Sundays.

In 1963, the theatre was remodeled and began screening French films. It would later became an Odeon operated theatre. The theatre apparently had a variety of switching back-and-forth with their name on pages of Ottawa’s Citizen. Beginning in 1969, the theatre more commonly became a French adult theatre, screening French X-rated films until 1974. It was reopened again as a movie house in the Fall of 1981 screening back French films. On September 4, 1991 the theatre immediately closed its doors for the final time when the city purchased the building.

The theatre turned into a national arts theatre, and believe it or not, it was twinned. After laying empty for years it was purchased by a contractor in 1998 and converted into the Multimexa Computer Training School. Sadly traces of the lavish interior decorations no longer exist.

Uploaded a current photo. Although the entrance was narrow it was certainly dramatic.