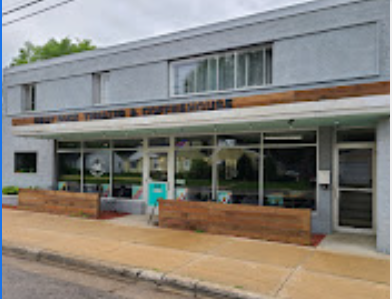 Anna and Andy Smith opened this micro cinema May 3, 2019, with a sold out crowd of 66 viewing Charley Chaplin’s “The Gold Rush” with live music. The Star-Tribune noted the couple were inspired by an article that said you could open a movie theater for $15,000. Built in a former Culligan Water store, further support was provided by the crowdfunding site IndieGoGo.

In October 2019 the theater received a big break when it was honored with the Rochester premiere of the future Academy Award winning best picture, “Parasite”, which was screened again the following January.

Because of Covid-19 the theater was closed from early spring 2020 to June 2020, opening again with “E.T.” and “Back To The Future”. Andy Smith said with the audience limited to 15 in July and August 2020 business dried up completely and the theater remained closed until opening again in April 2021.

Operating Friday thru Sunday, theater memberships and private rentals are available. The coffeehouse, open every day, offers a full range of coffee based drinks, tea, sodas and popcorn.

In February 2021 the theater was among 169 small businesses given relief grants by Olmstead County, with the Gray Duck’s share being $19,779.50.

There are a number of nice pictures of this theatre on Google Maps photos.