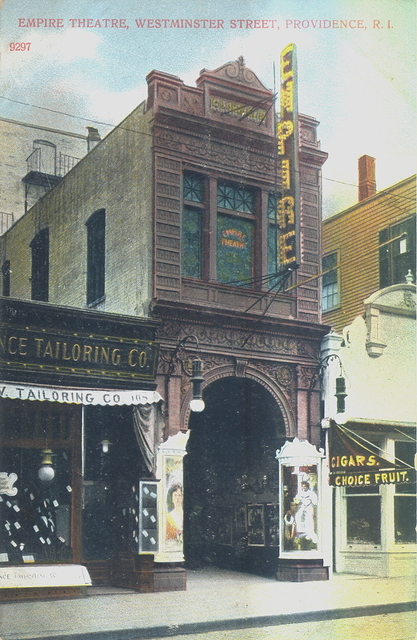 The Empire Theatre in downtown Providence was opened in September 4, 1899. It was closed January 16, 1915 and was razed many decades ago.

The Providence Journal Almanac from 1914 gives the seating capacity of this theatre as 1460. Proscenium: 36x36 feet; footlights to back wall, 60 feet; between side walls, 70 feet.

In an essay in The Providence Journal-Bulletin from December 26, 1964, Marc Greene recalls seeing Charlie Chaplin, live, on the stage of this theatre!

Chaplin at the Empire

He played a drunken lord here before he became a famous tramp.

“Sometime back…in the dim mists of antiquity, I was a kind of assistant theatre critic on these papers…
"My job was the old Empire on upper Westminster Street, operated by Spitz and Nathanson, devoted to lesser artists and productions and in the summer to a stock company. One winter I also covered Keith’s vaudeville theatre, and that is a pleasant memory.
"During my tenure at the Empire, there appeared a company presenting a skit, "A Night in an Old Music Hall.” One of the company portrayed a kind of tipsy, down-at-the-heel English lord. He sat in the right-hand lower box, and at one point in the doings he climbed unsteadily over the rail of the box onto the stage, where he proceded to take a clown’s part, mainly in pantomime.

Nobody paid any particular attention to this, but if you had the gift of dramatic discernment and understanding you gathered at once that this minor character in the play had, as the vernacular goes, ‘something.’ You would have been right, because he was Charles Spencer Chaplin….
“Not long after the foregoing episode he was ‘discovered’ by Hollywood, (Mack Sennett to be specific,) and in no time at all he was a world-figure. This was because his art appealed to all ages, from children to aged and decrepit.” (…)

That is some awesome due diligence on this and other Providence theaters! I love the story about Chaplin when he was a relatively unknown at the time. I only have one Chaplin movie in my collection “City of Lights” and he was splendid.

Oh what I would do to go back to the heydays of opera/vaudeville/theater/silents/talkies entertainment districts. I’ve often wondered if Chaplin and others of his time including Fatty Arbuckle and Harold Lloyd knew the tremendous impact and contributions they were making to other aspiring comics.

In addition to City Lights , my favorites are The Kid, The Gold Rush and Modern Times. When Modern Times was re-issued in 1959, I went to Boston to see it at the old Capri (Copley) and I later bought a copy of the soundtrack, which I still have and which is now rare. I also love many of his later films. Limelight with Claire Bloom knocks me out. I now have most of them on video.

The theatre’s life went from 1899 to 1915. Excerpts from Roger Brett’s Temples of Illusion and the building of the Empire follow:

“The Empire Theater stood on the same side of Westminster Street as the Westminster Theatre and Music Hall and just a few yards from them. Its minuscule entrance was built next to the store which had housed the short-lived Nickelodeon two years before. Empire Street, named for the theater [!!!], now climbs the hill from Westminster toward Weybosset Street where the theater once stood….

“Spitz and Nathanson built their Empire in four hectic months. Work started in May [1899]. (…)

“A short article in the Providence Sunday Journal of August 2th said,
‘There is no longer any doubt as to the date of the opening of the Empire Theater. It will be Monday, September 4th….The interior is finished in Nile green, cream, and yellow, with ornamentation in gold.’ (The carpeting was dark red.) ‘There are reproductions of mythological scenes, and the fibrous plaster work around the boxes and on the proscenium arch is a feature.’ (…)

“In seating capacity it placed somewhere behind Keith’s, and very close to the Providence [Opera House], ahead of the Westminster and far ahead of their own Olympic [Nickel].(…)

“The proper word to use in descrbing the interior of the house is ‘nice.’ Neither extravagant nor drab, it was not too large for the most intimate of plays, not too small for the biggest of musicals. The house was divided into orchestra or parquette, balcony or family circle, and gallery….

“On the morning of opening day, board fencing still blocked the Westmnster Street entrance and seats were still being placed…. At five in the afternoon, the last seat was bolted to the floor. When the Empire opened that evening of Labor Day, 1899, with Johnstone Bennett in A Female Drummer, Abe Spitz became the first Providence showman to have two theaters running simultaneously.”

The small Providence Journal ad for the Empire’s last day on January 16, 1915 stated:

Here is a great old postcard image of this theatre.

In December 1914 the Italian silent film spectacle Cabiria proved so popular at the Empire during its first week that it had to be held over, according to THIS AD. That was not a normal occurence in those days.

Sarah Bernhardt at the Empire Theatre (the one at Westminster and Empire streets), as reported in the Evening Tribune, June 13, 1911:
Sarah Bernhardt