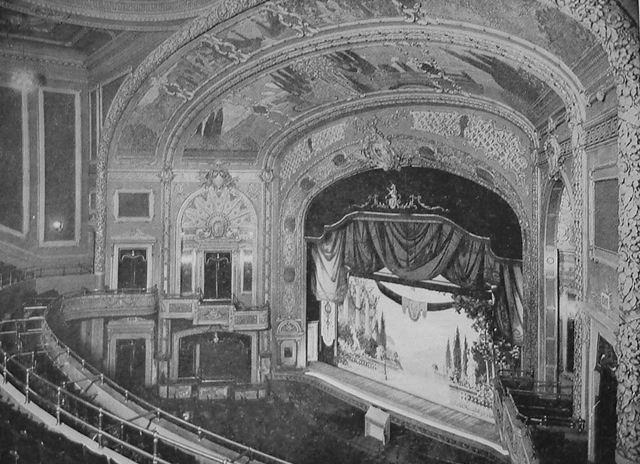 The Emery Brothers were vaudevillians who wanted to build the greatest legitimate and vaudeville theatre that Providence had ever seen. They had already built the Emery Theatre (later called Carlton Theatre) on Mathewson Street in 1914. They commissioned the architectural firm of Walker and Son to design their new theatre, which bore the name “Emery’s Majestic” at the top of its magnificent white terra-cotta facade. It opened on April 9, 1917 with vaudeville acts on stage and Ethel Barymore in “The White Raven” & Max Linder in “Max Wants a Divorce” on the screen. It could seat 3,000, more than the Imperial Theatre and Providence Opera House combined. The Strand Theatre, opened in 1915, was the Majestic Theatre’s only rival in size. The E. F. Albee Theatre would not open until the following year. Loew’s State Theatre, now known to us as Providence Performing Arts Center or PPAC, wouldn’t arrive for another decade.

The vaudeville acts were ultimately not successful enough to fill a theatre of this size and it switched to films-only programs from March 31, 1923 with Mae Murray in “Jazzmania” & Myrtle Stedman in “The Famous Mrs. Fair” plus a Stan Laurel comedy short. It also presented a number of plays, especially when it was known as the Shubert Majestic Theatre. Over the years patrons were able to see stage productions like “Hello, Alexander” starring McIntyre and Heath, “Cinderella on Broadway,” “The Whirl of New York,” and Al Jolson in “Sinbad”. “Chu Chin Chow,” the largest musical production ever to play a theatre in Providence, was at the Majestic Theatre, complete with elephants on the stage.

The Majestic Theatre continued on over the decades as one of Providence’s premiere first-run movie theatres, generally showing the best in Warner Brothers and 20th Century Fox productions. When then manager Edward Fay offered the Vitaphone on Christmas Day in 1926, the Majestic Theatre was said to be the first theatre in the world to be wired for sound. Fay had paid Warner Brothers $25,000 for exclusive Providence rights to the sound system.

In 1953 the Majestic Theatre was the first in the area to show a CinemaScope picture when “The Robe” opened here. The theatre went into decline in the 1960’s as new suburban theatres with easier parking opened and as first-run movies would no longer be the exclusive domain of Providence’s still-existing movie palaces like the Strand, Albee, Loew’s State, and Majestic. By the early-1970’s the theatre was sold to the Trinity Repertory Company, closing as a movie theatre on May 17, 1971 with “Patton” & “MASH”.

Trinity Repertory Company moved in 1973 to the former Majestic Theatre, naming it the Lederer Theater Center. Except for removal of the Majestic marquee, the exterior retains its stunning original elegance. But except for a part of the lobby area, the entire interior was gutted and restructured. The original stage with its great proscenium arch, and the auditorium’s palatial decorations, were all ruthlessly destroyed to create the more functional and flexible auditoriums that Trinity sought. The historic building now houses two performance spaces: the 500-plus seat Chace Theater and the 300-seat Dowling Theater, as well as offices, production shops, rehearsal halls, and conservatory studios.

“The Sunday Journal devoted the entire front page of the amusement section to a feature story on the removal of the once-famous organs in the Strand, (Loew’s) State, and Majestic. Carrying a picture of Chester McLean, Strand house-manager, and pictures of the relics of the organs, the article stirred up many nostalgic memories for older moviegoers. A resident of nearby Hope Valley, Theo Smith, is buying up the instruments "to save them from the scrap pile.” He repairs the organs, donating them to churches. He is also assembling a complete unit for his home."

“The Miracle of Our Lady of Fatima” packed them in at the Majestic. It was scheduled to move to the Carlton for an undetermined period."

In September 1926, this theatre was part of the eleven-theatre Celebrate Paramount Week.
Newspaper ad.

In the October 30, 1961 issue of Boxoffice Magazine, an ad was run showing how many mainstream theatres were showing Federico Fellini’s La Dolce Vita, a subtitled Italian movie. This theatre was one of those in Rhode Island. LINK

In April 1920 the silent screen vamp Theda Bara (anagram for “Arab Death”) appeared in the live play The Blue Flame at the Majestic Theatre. NEWSPAPER AD

The Theatre Historical Society archive has the MGM Theatre Report for the Majestic; Card # 547. There is an exterior photo dated May 1941. The Report says the theater is on Washington St., is in Good condition, and has a total of 2,263 seats. It was not showing MGM films.