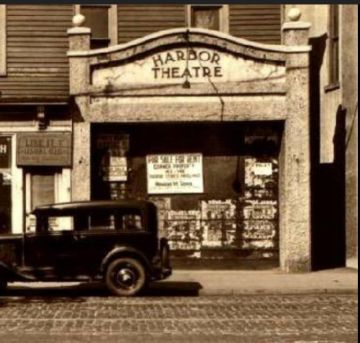 A conversion of an existing building, the Harbor Theatre was opened in January 1914. It was closed in 1925.

I found a reference indicating the theatre was at Richmond Terrace and Harbor Road.

I have uploaded a 1914 ad for the theatre and an image indicating it was for sale. A case of first in, first out.

The Theatre Historical Society’s data for Staten Island (PDF here) says that the Harbor Theatre was at 3005 Richmond Terrace, opened in January, 1914, and was still extant in 1925. It was designed (alterations of an existing building) by architect James Whitford.

The Harbor wasn’t listed in the 1914-1915 American Motion Picture Directory, which listed only four theaters in Staten Island, including a house called the Apollo Theatre just up the road at 2951 Richmond Terrace. THS says the Apollo opened in 1911 and closed in 1914, so perhaps the Harbor was its replacement. In any case, it is evidence that the Harbor was not Staten Island’s first movie house.