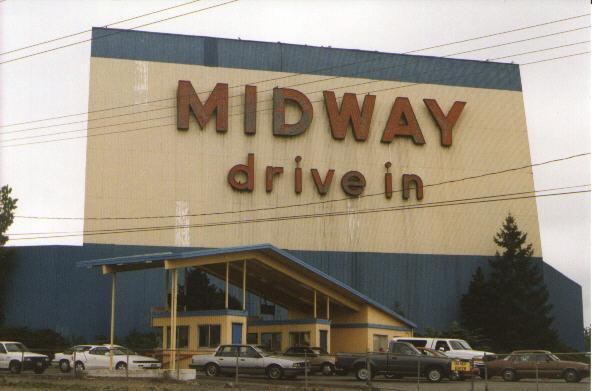 The largest single screen drive-in theater in the area. Opened on May 1, 1942 as the Northwest Motor-In with Bing Crosby in “Birth of the Blues”. It was renamed Midway Drive-In in June 1947. The theater has been closed for a number of years. The original wooded fencing was replaced about ten years ago with chainlink. The theater and lobby area are still standing but in a state of disrepair. The area is used every weekend for a swap meet and food is still sold out of the snack bar.

Unfortunately the swap meet closed after summer 2004 and the theater and all buildings were torn down in fall of 2005 for a new Lowes Home Improvement store.

My husband and I were driving down Interstate 5 today, and it appeared as though the screen and sign are gone. Am I right, or was I imagining things???

FYI: The screen/sign are gone, and construction has begun on the new Lowes store. I couldn’t believe how sad it made me to not see that screen as I drove down Interstate 5.

Not listed in my 1956 Motion Picture Almanac,could be listed by another nearby city?

This opened as Northwest Motor-In theatre on April 29th, 1942 and renamed in 1950 as Midway Drive-In.

I worked at midway drive-in from 1976-1978 as a field man, one of my best memories of my first jobs, lots of fun. I remember when Corvette Summer with Mark Hamill came out and the car that was used in the move came to the theater on opening night. Busted a lot of people for drinking kept the beer and we drank it ourselves.

I was a fill in projectionist on several occasions between 1981 and about 1991 at the Midway. It was always a pleasure to work a drive in, most of my career was spent in the multiplexes. The screen at the Midway faced East, the screen at the Aurora Drive In in North Seattle (operated by Pacific Theatres as well) faced to the West. The two theatres often had identical bookings as they were far enough apart so as to not be in competition with one another. The show at the Midway could start 30 – 40 earlier each night as the setting sun was behind the screen rather than shining on it. In the Summer of 1981, I was working both theatres and appreciated the earlier start at the Midway.

“Ed Johnson and Dwight Spracher have changed the name of their drive-in on the Seattle-Tacoma highway from the Northwest Motor-In to the Midway.” — BoxOffice, June 21, 1947

Someone has posted on YouTube: https://www.youtube.com/watch?v=tWmCwcbcQmA a Washington State Department of Transportation video of a drive on Highway 99 shot on June 7th of 1983. The Midway comes into view at 11:21. Showing a double bill of “Chained Heat” & “Vice Squad”. The video shows a good idea of what the neighborhood around the theater was like in 1983.