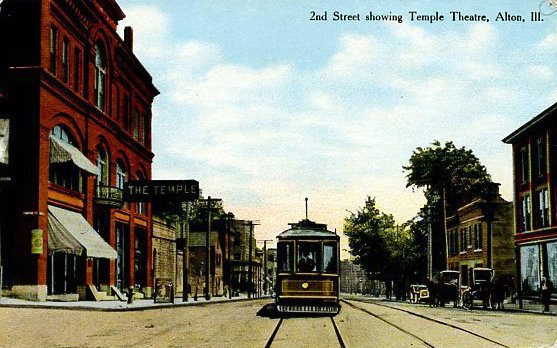 The Temple Theatre opened inside the Western Star Lodge of the I.O.O.F. and the theatre opened in 1906. The theatre portion seated 1102. It was about the size of the American theatre in St. Louis. Its first talking picture was shown in 1913. The theatre at that time was billed as the best equipped in the state south of Chicago.

There is a Temple Theatre in Alton IL listed in the 1897-98 edition of the Julius Cahn Official Theatrical Guide. The seating capacity is given as 1,151. Ticket prices range from 25 cents to $1. The theatre was on the ground floor and had both gas and electric illumination. The proscenium opening was 30 feet square, and the stage was 32 feet deep. There were 10 members of the house orchestra led by “Professor Baffuno”. W.M. Sauvage was the Mgr. Alton at the time had 4 hotels and was served by 4 railroads. The population was 17,000.

Many news items about the Temple Theatre, dating from 1899 to the 1920s, can be seen on this web page about theaters in Madison County. In addition, there is a 1955 photo of the Temple, the caption of which says that it had been built in 1890, and that the first talking picture seen in Alton had been shown there in 1913 (this might have been one of the movies made using the Gaumont Chronophone system, first used commercially in 1910.)

The Temple Theatre was partly owned by Alton’s Odd Fellows Lodge. It operated primarily as a live theater for most of its history, though the news items on the Madison County page indicate that movies were shown there during the theatrical off-season at least as early as 1908. The Temple began falling dark for long periods in the early 1920s. I’ve been unable to discover when it became a regular movie theater.

A boxoffice item of March 19, 1938, says that plans for the repairs on the Temple Theatre, recently damaged by fire, were being prepared by St. Louis architect Oliver W. Stiegemeyer. Given the Victorian look of the theater in the 1955 photo, it’s obvious that Stiegmeyer’s plans did not include any major alterations to the facade. I don’t know if there were any extensive interior alterations as part of the project.