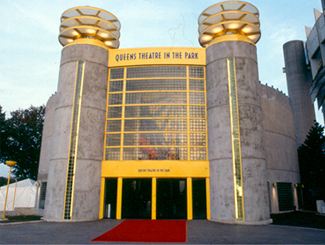 Originally built as part of the New York State exhibit for the 1964-65 World’s Fair, the theatre originally presented a 360 degrees film about New York State. Currently the theatre presents a mix of cabaret, concerts, Broadway revivals and new dramatic productions. The theatre also shows film festivals the last one was French films every Tuesday night.

I saw “2001: A Space Odyssey” here last night. It was a Blu-Ray presentation, and the screen wasn’t as big as I’d hoped, but it was slightly curved – a nice touch for a film that was originally shown in Cinerama. The sound system was excellent, and the theater staff was very friendly. I’m glad I went.

A highlight of the evening: to get to the theatre I had to walk around the Unisphere, the gigantic steel globe that was the symbol of the 1964-1965 New York World’s Fair. I hadn’t been so close to it since 1965.

Shortly after the closure of the Worlds Fair I saw a live production of Come Back Little Sheba with Jan Sterling.

The 14th Annual Queens World Film Festival will open here on November 1st. Details, including schedule and other participating venues, can be found at the official website