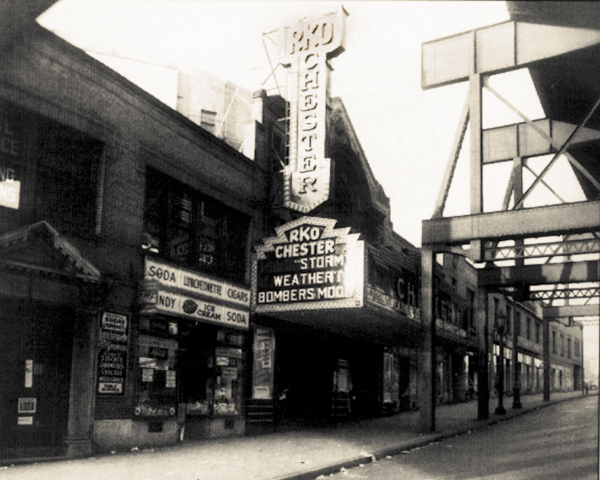 Situated near a south entrance to the Bronx Zoo, the Chester Theatre first opened in December, 1927, under Keith-Albee management with vaudeville and movies. When it became the RKO Chester Theatre, the stage bills were dropped at the onset of the Depression. The double-feature programs were always first-run for the area, but day-and-date with other RKO outlets in the Bronx.

The theatre is probably best-remembered for being mentioned in Paddy Chayefsky’s TV play and movie, “Marty”: “How about calling up that big girl we picked up in the movies about a month ago up in the RKO Chester”…

When the theatre closed in 1968, its auditorium was converted into a warehouse, then later a car repair garage. The building stood for many years, with its adjoining office space and stores housing the Alps Hotel, a so-called “hot sheets” establishment.

I finally got a quick look at the work going on inside today. The roof is gone and it looks like just the walls are left, some of the arches were still intact but thats it. I asked a worker who was leaving about the balcony and he said its all gone. I had seen the inside about 12 years ago and most of the walls above the level of the auto repair shop where still intact as was the balcony, it was very surreal.

Here is a link to a photo I took of the RKO Chester’s demolition. As you can see there is not much left. I went back the next day and finally got access to the site and there was even less. The eagle motiff over the bacony exit door was also gone. When I asked about it they said it was plaster and had been destroyed. It is a very sad end to a great theater
View link

I’m a school teacher in the area and only became aware of the theater’s significance as it was being demolished. Since then, I’ve watched Marty several times and always ask old-timers about the theater whenever possible. I posted some video and pics at the links above.

I was amazed that no one, seemingly, objected to the building’s demise. Very few of the area’s current residents are aware of what once was the RKO Chester.

The above links are broken. Here is the updated link.

I’m a school teacher in the area and only became aware of the theater’s significance as it was being demolished. Since then, I’ve watched Marty several times and always ask old-timers about the theater whenever possible. I posted some video and pics at the links above.

I was amazed that no one, seemingly, objected to the building’s demise. Very few of the area’s current residents are aware of what once was the RKO Chester.

I’ve just added an article to the photo section from September 9, 1954.

Memories! I worked for two summers as an usher at the RKO Chester. I marveled at the second floor with its memorabilia of times past. I remember one art piece depicting a coach for delivering mail up the nearby Boston Post Road. I went to school at nearby PS 6 and once had a season pass to Starlight Pool which was almost adjacent. The old cemetery on 180th street was not far away and recently I read that some soldiers going as far back as the Revolutionary War are interred there. And, of course, I frequently, very frequently visited the Bronx Zoo, not far away, and left the hot steaming streets of the Bronx and entered an exciting world, esoecially for a young boy, imagine entering the Zoo and the closest entrance was near the Chester. One could even see scratches made by glacial till near the pathway near the boat park. I remember boys diving off the close small bridge over the Bronx River and for one nickle. It eas an icon of the depression era and memories are vivid. I saw many movies repeatedly and remember, Jon Hall, Maria Montez and Saba in particular, RKO Chester, the hallmark of an era long gone. I close my eyes and return at times to a world of magic and my youth.

What was the last movie that the RKO showed? Was it apes or 2001?

in the early 60s I remember going here with friends to
see The Three Stooges Meet Hercules.