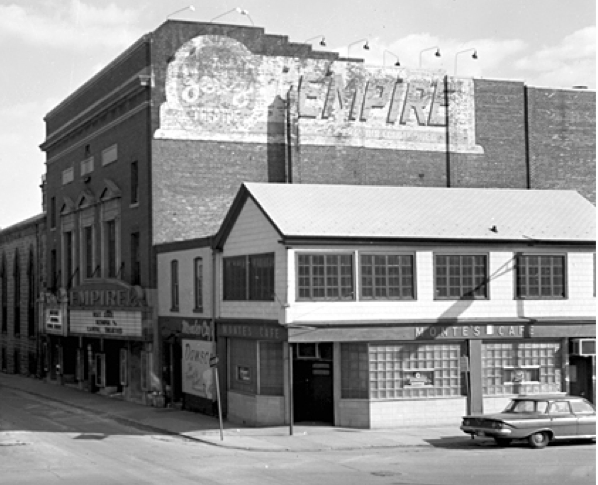 A lost theatre of New Bedford. The Empire Theatre was opened on September 11, 1922. It was closed in 1964, the final movie was Audrey Hepburn in “My Fair Lady”. In 1965 it was used as a live theatre for one production.

The MGM Theatre Photograph and Report form for the Empire has an exterior photo dated May 1941. The theatre had an impressive facade with a bulb-studded vertical sign and a long marquee. Attractions posted were “A Girl, A Guy and a Gob” plus “Argentina”. There were 6 poster cases along the facade. The Report states that the Empire is at 118 Elm Street in New Bedford, that it has been presenting MGM product for 4 years; that it’s less than 15 years old, in Good condition, and has 1,845 seats.

The Empire Theatre is still listed as operating in the 1950 edition of Film Daily Yearbook. Seating capacity is given as 1,850

“The Empire Theater in Elm Street was demolished in 1969. The theater opened in 1922 on the site of a former horse stable that burned down in 1914. At first, live entertainment – music, dancing, comedy, and such, was offered at the Empire. Then, in 1932, the Zeitz family acquired the property and they turned the place into a moviehouse. Before, during, and after World War II, Bogart, Hepburn, Brando, and the like, packed them in. In the 1950s, features included Gigantis, the Fire Monster and Teenager from Outer Space. The last movie ever shown at the Empire, in 1964, was My Fair Lady. The next year the traveling show Those Wonderful Days of Burlesque, appeared on the stage. It was the theater’s final performance, and it was fitting. The Empire started and ended with live entertainment. Today the site is a parking lot. One little story. In 1956, five teenagers were arrested in the Empire for hooting and hollering while waiting to see Jailhouse Rock starring Elvis Presley. As they were being led to the clink, one of the lads was discovered to be carrying a 15 inch rubber hose. When the miscreants were hauled into court charged with disorderly conduct, the judge went easy on them. Six months probabtion, His Honor ordered, along with an admonition to ‘Go straight!’”

The Theatre Historical Society of America’s theatres list, compiled by CT and THS member Barry Goodkin, says that the Empire was designed by J. S. McIntyre and opened Sept. 11, 1922.

Photos of the Empire and other New Bedford theatres can be seen in this great set:
View link

The Empire is listed in the 1927 Film Daily Yearbook as having 1700 seats and open daily.

My father, Gilbert Hemenway, was a projectionist at many of the New Bedford area theaters, starting at the Allen Theater where he and his brother George were trained by their brother Floyd to be projectionists. In those days you had to study electronics and get a license to be a projectionist. Union contracts specified a 2-man booth, as the projection rooms were called. My father started as a ticket-taker and usher and thats how he met my mother.

In New Bedford he worked at the Empire, Capitol, New Bedford, Orpheum, Dartmouth Drive-In, and Fairhaven Drive-In. In Fall River it was the Plaza and the Embassy – and there was the Newport Theater which I cant find in the RI listings. In about 1948 when I was about 5 year old, my mother and I would go with my father to the Dartmouth Drive-In in our Chevy Coupe and I would sleep on the shelf in the back. Before I was born my father worked other theaters. One was the Keith in North Fairhaven. I miss all those theaters. With my father, I grew up in all those theaters.

Architect J. S. McIntyre’s first name was James. If this house didn’t open until September 11, 1922, there must have been some serious delays during construction. The April 3, 1920, issue of The American Contractor said that McIntyre was then taking bids on the Empire Theatre project in New Bedford.

It was a large theater with a capacity of 1,845. In its early years it presented live entertainment such as dancing, comedy, music, etc.

In 1932, the Zeitz family bought it, and it became a movie theater. It had a good run with top box office movies all through the years.

In 1965 after a hiatus, a live performance called “Those wonderful Days of Burlesque” was the last show in the theater.

In 1956, a group of 5 teens were arrested while waiting for Elvis' “Jailhouse Rock” to play. They were making a lot of noise, shouting and hollering. They got six months probation, and were told by the judge to “Go Straight.”