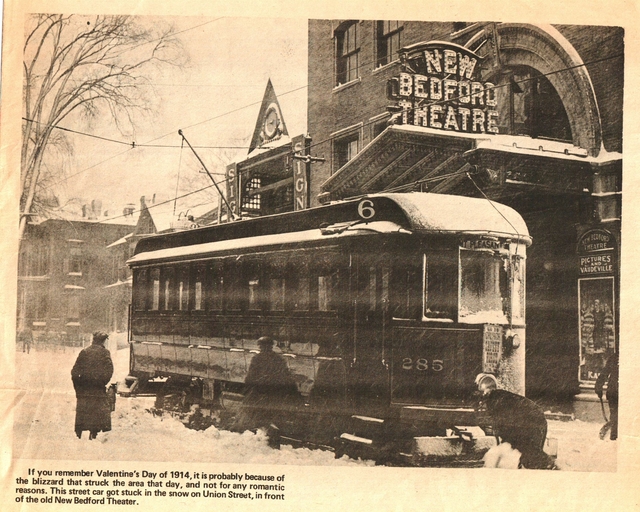 The New Bedford Theatre was built in 1896 on the site of a former opera house. It converted to screening silent movies in 1914, and was closed as a movie theatre in 1957. The auditorium was demolished in 1967.

The address was 251 Union Street, according to the 1952 New Bedford City Directory.

A parking lot and a small building housing an insurance company occupy the site of the demolished theatre.

Here is a photo of the interior of the New Bedford Theatre in 1945. And this is a brief history of the theatre as it appears in “New Bedford, A Pictorial History” by Judith A. Boss and Joseph D. Thomas:

“The New Bedford Theater was built in 1896 on the site of the old opera house and was one of the city’s foremost theaters. Many stock companies used to play here. The theater was also used for lectures, concerts, political rallies and high school graduations. In the early days of moving pictures, the sound would be provided by actors who would stand behind the screen and try to synchronize their voices, usually without much success, with the lip movement on the screen. Theater gradually became less popular after the advent of radio and, later, of television. The New Bedford Theater was torn down in 1968.”

There is a MGM Theatre Photograph and Report form for the New Bedford Theatre, with an exterior photo dated Sept. 1946. The theatre entrance was in the center of an imposing building at least 3 stories high. There is a very interesting old-fashioned marquee with an arched window above, and poster boards below. To the left of the entrance is the “New Bedford Theatre Confectionary” ice cream parlor. The Report states that the theatre is at 249 Union St., that it has been showing MGM product for 4 years; is over 15 years old and in Good condition, and has 573 orchestra seats and 750 balcony seats; total: 1,323 seats. There is an additional note: “House remodeled during 1945”.

From the 1990s booklet The Center – Downtown New Bedford in the 1950s by Carmen Maiocco:

“When the New Bedford Theater on Union Street was torn down in 1968, an awful lot of history disappeared with the building. The first talking motion pictures ever viewed in our city were shown at the New Bedford Theater. Originally the site was the home of the Old Grace Church. When the congregation outgrew the building and the Grace moved west to County Street to its current location, the former church was remodeled and opened as the New Bedford Opera House. That was 1882. Sarah Bernhardt tread the stage here. So did George M. Cohan and Edwin Booth. In 1896, the old church was demolished and the New Bedford Theater people remember was built. For a while, around the turn of the century on Union Street, evening gowns and tuxedoes were the order of the day, as the city’s gentry packed the house to see the likes of Lionel Barrymore and other theatrical stars of the era. By World War I, silent movies had largely replaced live performances. In 1926 the Zeitz family acquired the property. It was the Zeitzes who introduced the ‘talkies’ to the people of New Bedford. When Al Jolson belted out ‘Mammy’ in The Jazz Singer, it was standing room only at the New Bedford Theater. During the ‘30s, '40s, and '50s, the downtown movie palaces boomed. The movies provided cheap, clean fun for people of all ages. Think of it: in 1950, in the Center alone, there were four movie theaters within walking distance of each other: the Olympia, Empire, State (Zeiterion), and the New Bedford Theater. These houses had a capacity of approximately 7,000 seats – and much of the time, all those seats were filled. (I recently read an article that argued the key to rejuvenating center cities is to reintrocuce movie theaters back into the downrtowns. I think it’s a good idea.) Today, all that remains of the New Bedford Theater is a couple of store fronts along Union Street, and a flat black parking lot.

“One memorable event that occurred at the New Bedford Theater was the world premiere of the movie Moby Dick on Wednesday evening, June 27, 1956. The film version of Melville’s famous novel of the hunt for the great white whale, starring Gregory Peck, and produced and directed by John Huston, opened simultaneously at three downtown movie houses: the State, the Empire, and the New Bedford Theater. Everybody wanted to get in on the act. And no wonder. The city was caught up in a Moby Dick frenzy for three solid days of non-stop celebration. When Peck, and his co-star Friedrich Ledebur, who played the tattooed harpooner Queequeg, led a parade in an open car along Purchase Street, 50,000 spectators jammed the sidewalks to catch a glimpse. Costumes of the whaling era were all the rage, with gentlemen sporting top hats, and ladies in bonnets and hooped skirts. All over the city men grew beards and entered the Captain Ahab Beard Contest. Herbert M. Souza won the cash prize of $100 and a $25 savings bond. Arthure Hood came in second. The festivities included a big bash attended by 400 guests at the Wamsutta Club, a costume ball at the Whaling Museum, and block parties up and down the waterfront. New Bedford had hosted other film premieres in the past: the original silent Down to the Sea in Ships in 1922, and a later version of the same title in 1949, starring Richard Widmark; but neither of these events compared to the opening of Mody Dick in 1956,”

A November 13, 1967, Boxoffice Magazine item about the planned partial demolition of the New Bedford Theatre (the auditorium and upper floors of the building were to be razed, and the former lobby converted to retail space) said that the theater had last been used to show movies ten years earlier.

Photos of the New Bedford Theatre and other New Bedford theatres can be seen in this great set:
View link

My father, Gilbert Hemenway, was a projectionist in New Bedford from the 1930s until 1956. He worked at the New Bedford Theater. In the 50s it was only open during Summer vacation. What I remember is that there was a candy machine in the lobby and no snack bar. You had to tell the door man that you were going to the little store on the east side of the entrance.

My father’s older brother Floyd trained him and another brother George at the Allen’s Theater, located on east side of Acushnet Avenue between Coffin Avenue and Phillips Avenue, in the 1930s. My mother met him there when he was an usher and ticket taker. His early years were at the Bailey Square and the Keith (Fairhaven). He worked the Capital, Empire, New Bedford, Orpheum, Dartmouth Drive-In, Fairhaven Drive-In, and in Fall River he worked the Plaza and the Embassy, and in Newport the Newport Theater. When the South Pacific tour came to the New Bedford Theater, he ran the spot light. I remember one occasion when my father and Uncle George were working side-by-side at the New Bedford Theatre. They had licensed, 2-man Union booths at that time.

Let me tell you the story of The Ghost of the New Bedford Theatre. One day my father decided to investigate what might be up in the attic through the access in the ceiling above the last row of chairs in the second balcony, and when he hoisted himself up, a block of wood fell. The second balcony was supposed to be closed. An usher came up to investigate with a flashlight. My father let out a scary moan in the dark shadows and the usher took off running. He was back in the booth when the usher came up with the manager and asked my father if he heard anything. My father just played dumb.

I posted some hilarious stories of what my father did while at the Plaza in Fall River. http://cinematreasures.org/theater/12048/

I grew up in these theaters, especially through my father. With their disappearance, a piece of me is missing.

The photo on the MGM Theatre Report, which was made in Sept 1946, shows the same theater sign and peaked-roof rain canopy which was on the theater when the photo posted above ( showing a stalled streetcar in front of the theater) was taken in Feb. 1914.