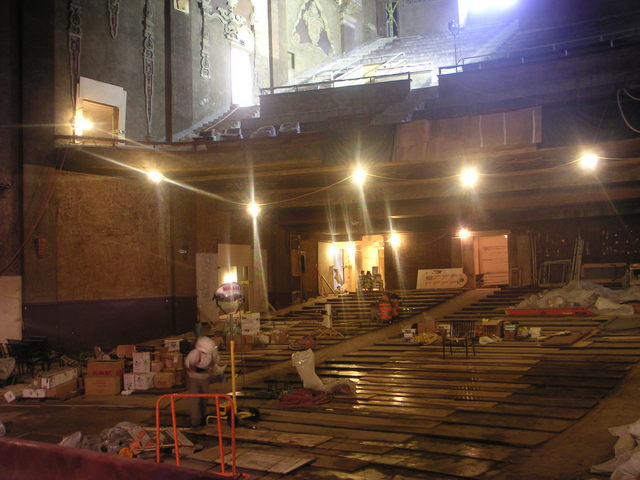 The Balboa Theatre is located in the heart of San Diego’s downtown, next to Horton Plaza. It opened for vaudeville and movies on March 28, 1924 in a Spanish Revival style. Originally with a seating capacity of 1,534, with about 500 of those seats in the balcony, it was San Diego’s first big downtown movie theatre. There were ornamental niches on both sides of the proscenium arch which featured waterfall mountain scenes and originally used real water (and do so again with the recent restoration). A Robert Morton theatre organ was installed, but was moved in 1929 to the Fox Theatre (now Symphony Hall) in San Diego, where it remains.

The Balboa Theatre closed in 1986. In that year, it was purchased by the city of San Diego, which planned to reuse it for non-entertainment use and at one point considered gutting it. Many helped to save it, with Steve Karo as the preservation hero who worked hard to convince people of the potential of the former movie palace.

The San Diego Council voted to finance the restoration of the historic Balboa. Westlake, Reed & Leskowsky were the restoration architects. After 3.5 years of a $26.5 million renovation, the theatre had a gala opening January 19, 2008, as a venue for theatre, concerts, and other live performances. There are now 1,300 seats. The original marquee was replicated and the domed entry was restored.

The Robert Morton 4 Manual / 23 Rank ‘Wonder’ organ, one of only five manufactured, originally installed in 1929 in Loew’s Valencia Theatre, Queens, New York, was installed and restored at a cost of one million dollars in 2008. It made its debut performance at the Balbao Theatre in February 2009.

I went to the Balboa Theater for the first time last Saturday night. They were showing a colorized (yes, you read that right) version of Plan Nine From Outer Space on the big screen with members of the cast of Mystery Science Theater 3000 live on the stage commenting on the movie. It was a hoot with some of the people from Comicon showing up in costume as part of the audience.

The interior of the theater is gorgeous, not overdone or ostenacious. It probably looks much like it originally did. They oddest features are the faux waterfall scenes set into alcoves on each side of the stage. The lobby area is minimalist to say the least, but the 1300 plus seat interior is worth a look see. Of course, since it is a live venue now, you won’t get in for the cost of a movie ticket. You’ll have to pay a minimum of $25 to see anything there — even Plan Nine from Outer Space (colorized no less).

LM, it is so nice to see older pictures when the theatre wasn’t encompassed by Horton Plaza.

Here is a photo of the Balboa I took earlier this month:
View link

Closed from 1985, the Balboa Theatre, a movie palace built in 1924 in
downtown San Diego, reopened in January 2008 after a $26.5 million dollar
restoration. See the difference in the “before” photo (from
November/December Preservation magazine of the National Trust for Historic
Preservation) http://www.flickr.com/photos/28011786@N03/
and the photo “after” restoration by Evergreene Architectural Arts of the original paint scheme:
View link

Since reopening, the Balboa has welcomed more than 131, 000 patrons, servingagain as a economic engine and cultural oasis of downtown.

The Balboa Theatre has lost another hero.

Leo Schario passed away at the age of 92 last week. He was a wonderful friend and mentor and one of our earliest “Save Our Balboa” crusaders. His theatre knowledge and experience was unsurpassed and he was an instrumental player in our efforts to save the Balboa Theatre from being gutted. In the beginning, it was a very small band of activists that persevered in our efforts to save the Balboa Theatre from destruction. It started with an army of powerful detractors and ended with an army of supporters. Few are aware of what a tremendous struggle it was. Thank you Leo for caring and always being generous with your time, your knowledge, your experience and most of all your friendship. Sincere condolences to your long time friend and partner Hugh Chandler.

The WONDERFUL, MAGNIFICENT Balboa! Back in the ‘70’s I remember going to see a double bill there with my dad, of “Blue Max” and “Dirty Dingus McGee.” And just before it closed, I went to see “Purple Rain” there just to have the chance to go into the theatre. I remember looking up at the balcony, which was closed to the public, and seeing these enormous, tall, standing sound baffles, which looked like Easter Island statues looming silently over the auditorium. I could never have guessed that twenty years later I would be standing on that stage singing the role of Valens in Georg Frederick Handel’s oratorio/opera “Theodora” with the Bach Collegium San Diego under the baton of Richard Egar. The Balboa Theatre is one of the finest concert halls on the west coast, and a GREAT SAVE for the people of San Diego. Thanks primarily to Jan Manos, who forced the recalcitrant City’s hand. Well done, Jan, and thank you.