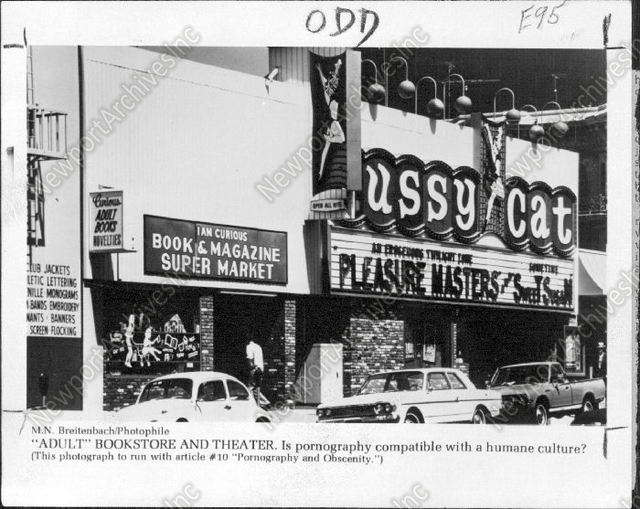 The Pussycat Theatre was opened April 3, 1968 with “The Girls on ‘F’ Street” & “Love is Only a Word”. Located on Fourth Avenue close to F. Street in downtown San Diego.

The Pussycat Theatre was closed in 1981.

Most of the SD ‘Cat photos are screen shots from the George C. Scott film Hardcore, shot downtown in 1979.

Located on lower 4th, this was one of the first half dozen Pussycat Theatres opened by Dave Friedman and Dan Sonney. This locale was specifically built as a Pussycat, originally intended to be a 16mm incandescent house and still outfitted with some of that equipment when Vince Miranda and George Tate at Walnut Properties purchased the Pussycat chain in 1968 and began operating this and many other San Diego theaters, most of them general-release cinemas or late night grindhouses.

Open from noon to 5:30 a.m, this Pussycat’s exterior decor was mildly seedy, if era-apropos: faded and cracked faux-bricks, twin poster marquees ringed with flashers and lined in crimson velveteen, lit by flashing red and purple lights, with its ticket booth taking up the outside corner of the entranceway, stationed right there on the precipice of colorful, crazy lower 4th.

One of the early managers (early to mid-70s) was future F Street Bookstore founder Gojko “Greg” Vasic.
Hoping to sweep downtown free of porn blight, the city targeted the adult merchants with eminent domain proceedings intended to condemn the properties, so they could be refitted to suit the resurgent Gaslamp Quarter, whose acreage would be added to the National Register of Historic Places in 1980. The city’s Redevelopment Agency named around 75 businesses and individuals in an eminent domain lawsuit filed December 31, 1979.
The 4th Avenue Pussycat was one of them. The city confiscated the keys in 1981, though Walnut kept operating other downtown theaters as â€œtemporaryâ€ Pussycats, until virtually all the companyâ€™s San Diego theaters were forced to permanently shut down.

Is this a bit of it on the left? Facebook – San Diego Historic Neon

What is there now?