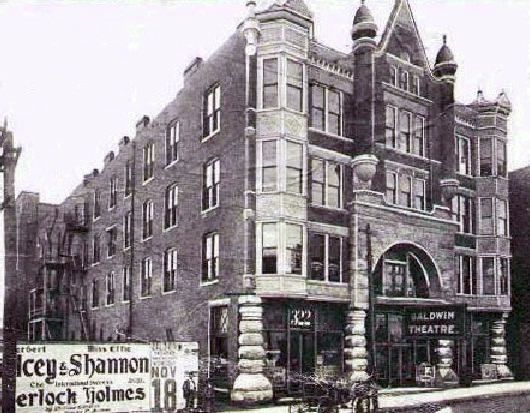 One of the many theatres that populated downtown Springfield. The Baldwin Theatre was opened in 1901 seating 782. It was destroyed by fire on January 6, 1909.

The Baldwin Theater burned in the mid 1920’s, and was located across St. Louis Street from the Gilloiz Theater which is now being restored.

Here is a postcard view & history of the Baldwin- – -
View link

The history of the Baldwin Theatre that seymourcox linked to says that it was destroyed by fire on January 6, 1909. It’s possible that it never operated as a movie house, though it might have presented exhibitions of early films as a technological curiosity.

From May to June of 1907, the Nickelodeon took over a retail spot to show full-time movies in the “Store Show” era of film exhibition. The Nickelodeon opened May 3, 1907 with the Lubin film, “The Unwritten Law: A Thrilling Drama Based on the Thaw-White Case.” It closed with the Pathé Frères film, “Life and Passion of Christ” with the 44-minute film broken into three parts that required three separate nickel attendances over three days. The 15-minute screenings also saved on eye strain.

Meanwhile, the Baldwin remained true to is mission of providing live performances. However, an appearance by journalist Opie Read on January 5, 1909 ended the run of the venue which was completely destroyed by fire the next day. The Landers Theatre was the replacement for the Baldwin.

The Baldwin Theater (1891-1909) was located on 318-322 St Louis Street next the the Colonial Hotel. It was built in 1891 at a cost of $109,000 (Approx. 3 million today) by H. B. McDaniel, Frank Fellows, Frank Curran, Arch McGregor and Peter McCourt. The Grand opening night was the day after Christmas December 26th 1891. Since it was built to be a theater for vaudeville, plays & music It was quite the show place. Like the The Fabulous Fox and Powell Hall in St. Louis. People like John Phillips Sousa, Al Jolson & Eddy Foy preformed there. There were meetings and political rallies held there. And many movers and shakes of the day had their offices in the building. Judging from the interior photos the Baldwin would be twice the size of the Landers Theater. It burned down on January 6th 1909 from a fire that started in the boiler room. After the fire, George McDaniel took the four pillars prominent on the front of the theater and placed them on the driveway of his house on South Campbell Road. The McDaniel Building would be built in its place which is now the U Student living at 317 E Park Central.