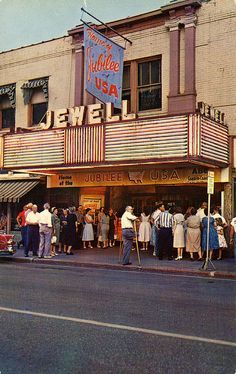 Located on S. Jefferson Avenue near Park Central Square. The Jefferson Theatre was opened as a vaudeville theatre September 28, 1911. In January 1921 it became a full time movie theatre. Taken over by Fox Theatres and remodelled in 1930 to the plans of architect Lee DeCamp, it was renamed Fox Plaza Theatre on September 14, 1930. It was renamed Jewell Theatre on January 14, 1948.

The front entrance was housed in a two story building. The theatre had a large rectangular marquee with large neon letters spelling out the theatre name on three sides. There was a large spacious lobby before entering the beautiful auditorium.

On June 2nd, 1915, my great grandfather Francis Oren McHenry who was a hard working, proud man who used to be the editor and chief of the Sparta Herald in Christian County, MO., but worn down by illness and back luck including the death of his wife, was working for room and board {{trying to get enough money saved to go back to be with his only child in El Paso,Texas}} lsleeping on the couch in the 2nd floor where the Corn Land Company rented the space. Turned on the gas & wrote his last letter to his daughter. It was known at that time as ‘the old Jefferson theater building’. Nobody claimed his body so it was held for over two month in the basement of the local mortician’s basement on ice till my grandmother sold everything she had back in El Paso to make a down payment to the ghoul. He then dumped my great grandfather’s body into an unmarked grave in the potter’s field there in Springfield.

Addendum by McHenry to Message Posted Mar 10,2005 at 11:13AM:
I neglected to include that my Great Grandfather committed suicide intentionally do to his state of despair, it was not an accident. The way it was written by me above would leave the reader a bit confused since all I said wrote was ‘He turned on the gas’ .. Corner’s Inquest: Death by asphixiation with suicidal intent..plus the final goodbye to his daughter-my grandmother. I just felt it was fitting that somebody, somwhere should know about this completely unknown bit of personal history of the Jewell Theater ; unknown even to everyone in the familiy after that date since he was never spoken of again since in those days , suicide resulted in one’s immediate excummication from all family records. I uncovered the events of his life and death on my own 80 years after the fact.
D. McHenry

Looks like the Jewell has been dwemolished. A google maps view of the area shows an empty lot turned into a small park.

There is an historical marker indicating where this theatre was, because the Ozark Jubilee was presented on its stage. This was a very important piece of mid-century history for Springfield, to have a nationally televised program originating here. The theatre building was demolished in or soon after 1961, when the theatre closed. Later, the entire block where the theatre stood was leveled and made into a little park. The marker can be found near the intersection of Jefferson and McDaniel in downtown Springfield. Auditorium picture here: View link

Ozark Jubilee was mentioned in the February 19, 1955, issue of The Billboard. The show had been airing from the studios of the University of Missouri at Columbia, but was scheduled to return to the refurbished Jewell Theatre about April 1.

The Jefferson Theatre was built for Harry Sanford Jewell, publisher of the The Springfield Leader, and opened on September 28, 1911. In its early years it was strictly a vaudeville house, but by the late 1910s it was struggling and remained dark for about two years except for a few road shows. In 1921, the January 28 issue of the Springfield Republican reported that the Jefferson Theatre had reopened the previous night as a movie house.

In 1930, the house was extensively remodeled for the Fox circuit and reopened on September 14 as the Fox Plaza Theatre, according to the September 15 edition of the Leader. The remodeling was overseen by architect Lee DeCamp. In 1936 it was renamed the Jewell Theatre and operated as a movie house until becoming the home of Ozark Jubilee, a live music show broadcast first on radio and, from 1955, on ABC television.

Two 1954 ABC Saturday Nite Ozark Jubilee hosted by Red Foley photos added courtesy of Jerry Raymond. likely the same photos that were in the 2010 link that is now dead.

Fox took over the Jefferson Theatre renaming it as the Fox Plaza Theatre on September 14, 1930 with the film “Dancing Sweeties.” Fox retired the Plaza during World War III but decided to rehab the theatre after the Fox Theatre fire of December 9, 1947. The Fox bookings were moved here as of January 14, 1948 when the theatre was renamed the Fox Jewell Theatre named after Harry S. Jewell opening with the films “Good News” and “Blondie’s Sweethearts.” Movies ended on February 3, 1954 at the Jewell Theatre with a double feature of “Gun Fury” in 3-D and “China Venture” in 2-D.

The Jewell then became home to the locally-produced but nationally-fed ABC radio network series, “Ozark Jubilee” that ran from August 7, 1954 to September 23, 1960. When the series ended, the Jewell closed. Following a demolition sale, the Jewell was demolished almost 50 years after it was built in February of 1961. .