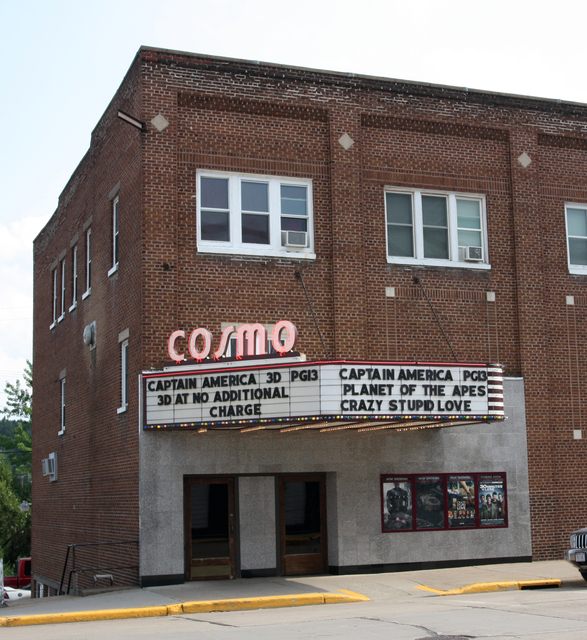 The Cosmo Theatre on Main Street in Merrill is housed in a vintage theatre building which has been twinned, and screens first-run films. The Cosmo Theatre’s facade features an Art Deco-style marquee lit with pink, blue and white neon lighting.

The Cosmo was featured in the incredibly bad 1975 movie “The Giant Spider Invasion.” You can see it in the background when the townspeople are battling the “spider” in the streets of a town at night. I was recently back there and it is still a great movie-going experience. The staff is extremely friendly and the concession prices are amazing—$3.00 for a giant bucket of popcorn which they pop on the premises. They also offer trays that fit into the seat drink holder which enables you to put your popcorn and up to three drinks between you and the person next to you. That’s something that I wish more theaters had.

The Cosmo was destroyed in a fire on 12/17/28, according to the Sheboygan Press. Presumably it was rebuilt:

Fire starting from a stoker furnace Sunday afternoon destroyed the Cosmo Theater block here and drove more than 300 theater patrons, most of whom were children, into the street. The loss was estimated at $90,000. Today there was nothing of value to be found in the theater or the adjoining Belleview Cafe. The second floor of the showhouse had caved in when the flames shot up the walls and when the combined fire departments of Wausau and Merrill finally succeeded in gaining control of the fire. There was little left to salvage.

The fire started at about 2:50 p.m., Sunday and soon after that time the theater patrons smelled the smoke that arose from the basement. The children began to file out of the theater in an orderly manner and in a few minutes the place was emptied. The motion picture operator continued to run the picture on the screen in older to avoid a panic. The fire was not under control until 6:30 p.m.

In addition to the cafe, the building housed five business places and eleven apartments. In one section of the building is located the telephone office. Smoke poured into the latter place but the telephone operators stuck to their posts for two hours after the fire started. From 5 to 5:30 p.m., the city was isolated as far as telephone communication was concerned. One fireman was hurt in fighting the flames and he was removed to a hospital. Physicians said his injuries were not serious.

The COSMO Theatre in September 2011 completed a $200,000 digital film and audio upgrade. In celebration, the 472-seat COSMO offered free movie screenings of “Despicable Me,” “Bridesmaids” and “Pirates of the Caribbean: On Stranger Tides” through Sept. 22.

Owner Dennis Lerch said “Film will probably cease to exist” in a few years. Trevor Dzwonkowski is the manager.