NextAct Cinema at the Pikes

Previous Names: Pikes Theatre, Next Act Cinema at the Pikes 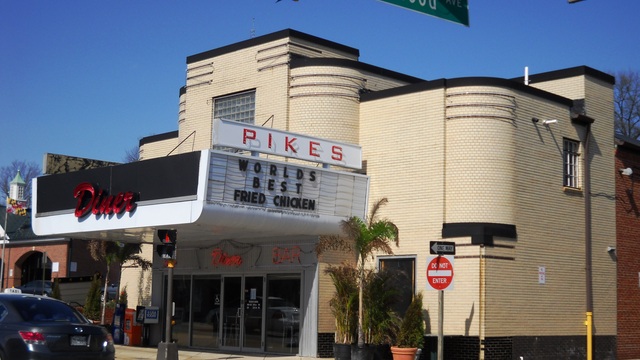 The Pikes Theatre opened March 25, 1938 seating 617. Designed in an Art Deco motif that has survived the years. It continued to show movies until closing in 1984.

It reopened as a twin screen cinema and dining experience on November 1, 2013 as the Next Act Cinema art the Pikes. The two screens each have 80 seats. It was closed at the end of 2016. It was reopened March 27, 2019 as NextAct Cinema owned by African-Americans.

Here is another photo:
View link

Fantastic piece of period architecture. The exterior has been relatively well preserved with some remnants of auditorium (e.g. wall details) still in place. Photos from March 2011: Photo 1, Photo 2

The Pikes has been remodeled and REOPENED as a movie theatre, with two 80-seat stadium auditoriums in the front, and a smaller diner in the rear. Reopening was on 11/01/2013; the operator is former JF Theatres booker Ira Miller, who also runs the expanded Rotunda Cinemas and Beltway Movies 6.

The Saturday, April 9, 1938 issue of The Film Daily listed the Pikes Theatre in its “Theater Changes” column as a new theater opened on March 25.

The theater had closed in September 2016, but is now open again under new ownership as the Next Act Cinema at the Pikes.

BlackBusiness.org article about Next Act Cinema and the Official Website link which should be updated. Address shows as 921 Reisterstown Road.

The theatre operated as the Pikes Theatre from 1938 to September 3, 1984. Renamed the Next Act Cinema at Pikes Cinema. It relaunched after being home to restaurants on November 1, 2013 with “Gravity” playing in 3D. It closed at the end of 2016.

The theatre re-emerged as the only Black-owned theatre in the Northeast when Anthony Fykes rebranding it as the NextAct Cinema at the Pikes on March 7, 2019 with an official grand opening ceremony on March 27, 2019.