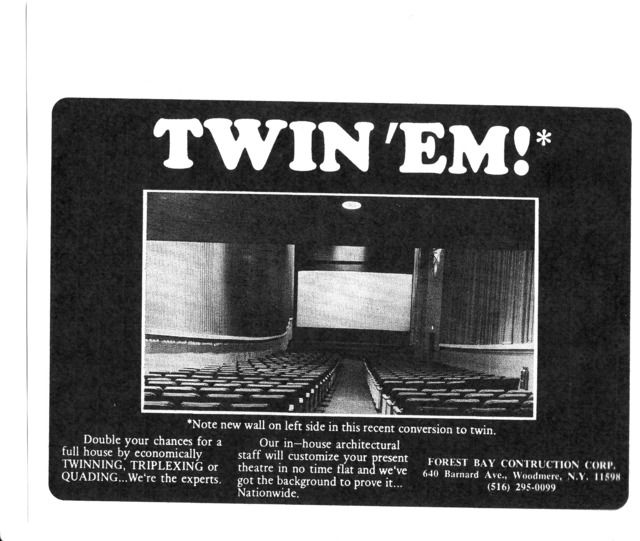 The Great Northern Theatre opened on March 24, 1966 with Henry Fonda in “Battle of the Bulge” presented in Cinerama. The theatre was in the Great Northern Plaza in North Olmsted. It was originally a single screen theatre. The screen was a curved 90-foot Cinemascope type. After National Theatre Corporation took over the Great Northern from RKO Stanley Warner, the original auditorium was twinned on June 15, 1977. It was subsequently quadded, and later on, three additional screens were added behind the original auditorium, which included the Cleveland area’s first THX sound system.

The architect of this theater was quite possibly, if not definitely, Drew Eberson. The archive of his and his father’s work indicates he drew up plans for a theater at the Great Northern Shopping Center in 1965 for Stanley-Warner which was the original operator.

Some black/white from 1973 during St. Richards Church services at theatre (was still single screened) due to church renovations.

Four color pictures taken on Oct. 23, 2000 day after theatre closed which by that time was a Seven screened theatre complex. Four of the Seven theatres were in the original auditorium. The remaining Three were in newer construction in the rear.

I have more pictures if any interest.

This is the way movie theaters should be build. NOt this crazy multi theater they do now. And I hate that they paly all the movies in every theater now

Final day of business at the Great Northern Theater was 10/22/2000. The final films shown were Get Carter, Meet The Parents, Remember The Titans, Urban Legends 2, The Watcher, Bring It On, The Replacements, and What Lies Beneath.