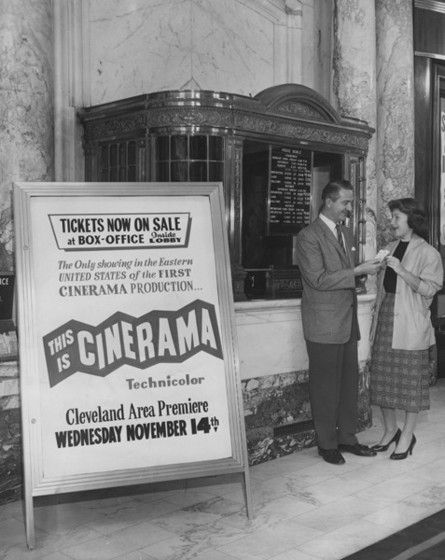 The following is Part 49 in an ongoing, semi-regular series of retrospectives on CINERAMA, the legendary motion picture process that kicked off the widescreen revolution. The series focuses on providing a market-by-market historical record of when and where Cinerama and its multi-panel clones were exhibited. These easy-to-reference articles serve to provide nostalgia to those who experienced the Cinerama presentations when they were new and to honor the movie palaces in which the memorable screenings took place.

THIS IS CINERAMA
Theater: Palace
Premiere Date: November 14, 1956
Engagement Duration: 32 weeks
Cinerama Projection Format: 3-strip / 26 frames per second / 7-track stereo
Promotional Hype: “CINERAMA is the ONLY NEW WONDER of the entertainment world!” “CINERAMA cannot and will not be shown in any local or neighborhood theatre and will never be shown on TV” “The only showing in eastern half of U.S. of the first CINERAMA production”

SEARCH FOR PARADISE
Palace
August 19, 1958
15 weeks
3-strip / 26fps / 7-track stereo
“CINERAMA takes you to the farthest corners of this planet Earth… Hear Robert Merrill sing new CINERAMA music composed and conducted by Dimitri Tiomkin…visit Shalimar…Ceylon, Nepal, Vale of Kashmir, Happy Land of Hunza…all these and many more await you in the newest and best CINERAMA production.”

WINDJAMMER
Palace
June 9, 1959
6 weeks
3-strip / 26fps / 7-track stereo
“Produced in CINEMIRACLE, Presented in CINERAMA” “A whole new world of adventure, thrills, excitement and romance await you! An opportunity of a lifetime! There are hundreds more exciting experiences too numerous to mention…come see it!”

THIS IS CINERAMA (Return Engagement)
Palace
July 21, 1959
3 weeks
3-strip / 26fps / 7-track stereo
“Returns to Cleveland by public demand!” “If you must see this great CINERAMA spectacular, now is your last chance!”

THIS IS CINERAMA (Re-Issue)
Fox Cedar-Center
June 27, 1973
4 weeks
70mm / 24fps / 6-track stereo
“The Last Time There Was A Show Like This One, It Was This One! THIS IS CINERAMA Is Back To Entertain A Whole New Generation”

(Thanks to dave-bronx for providing the photo.)

Hurray, it’s back! I kept waiting for Cleveland when the series was first introduced, but it never got that far. Great to finally see it.

I am so glad to see this series resume – and with the very city that I have been waiting for, Cleveland. This where my love affair with Cinerama began, on a chilly February morning in 1957 when I was nine. All the kids were given flyers at school that allowed them to see “This is Cinerama” for $.90 on Saturday mornings. My whole family went, now all but one of them gone. I can still so vividly remember that B&W prologue, Lowell Thomas intoning, “Ladies and gentlemen, THIS is Cinerama” and those curtains opening and opening and opening…

I must have seen “HWTWWW” eight or nine times. I also remember seeing “In Search of the Castaways” at the Palace during a lull in Cinerama presentations; it was projected on about the center third of that enormous screen and was somewhat distorted as a result.

The Great Northern was a terrific purpose-built Cinerama house, though its screen had a much shallower curve than the one at the Palace. When I saw either “Khartoum” or “Battle of the Bulge” there, there were posters in the Great Northern lobby advertising “Cinerama’s Russian Adventure” narrated by Bing Crosby, but apparently the film never was actually shown there.

According to the archive of Cinerama Theater plans at UCLA, the Vogue Theater, which was owned by Stanley Warner, in the Cleveland suburb of Shaker Heights, was a candidate for conversion to Cinerama, but the company opted to build the Great Northern instead.

There’s a Cinerama archive at UCLA? I’m curious what might be there re Philadelphia’s Boyd Theatre. Architectural plans for conversion of existing theater? photos?

Howard, the collection consists of boxes of architectural plans, however the plans themselves cannot be viewed online. One would have to go to the site UCLA has the collection in storage. The collection is available to legitimate researchers. There is a guide to the collection that can be examined here; I did not see a box listed for the Boyd, though there is one for the Randolph, if you click on the entries under the Container List.

Thanks, I expected it would be only in person. Randolph would be interesting, and 1963 earlier than I would’ve figured but won’t help in Boyd’s restoration. Oh, well.

Thanks so much for reviving and continuing this series! Lived in Cleveland from 1967-1972 and my only “Cinerama” film seen there was “2001” at the State (went a few times). I also remember quite well a few other great large format films at the Cedar Center and the Colony in Shaker Square. Again, thanks, and keep up the great work.

A picture of the crowd outside the Palace on the opening night of “Seven Wonders of the World”: View link

Great to see the series has returned! CSWalczak: Thanks for the link to that great “classic” photo of the Palace. I love seeing photos of the crowds at theatres showing Cinerama films.

I’m a new poster. I LOVE this series. What a great idea. Any chance of adding Buffalo, New York to the series? Buffalo was my home town and a big Roadshow market in the 1950’s and 60’s. The Loew’s Teck(formerly Shea’s) was the major Theater to show the three strip Cinerama and other wide screen events of the era. Our family spent many a happy time in that theater. If any of you other posters are planning a trip to Los Angeles or already live here, you will probably be interested to know that Arclight Cinemas will be having a 60th birthday celebration in honor of Cinerama from September 28 to October 4, 2012. They will be playing all of the Cinerama Travelogues as well as THE WONDERFUL WORLD OF THE BROTHERS GRIMM, HOW THE WEST WAS WON, IT’S A MAD MAD MAD MAD WORLD, and 2001: A SPACE ODYSSEY. They will all be played in the Cinerama Dome on Sunset Blvd.