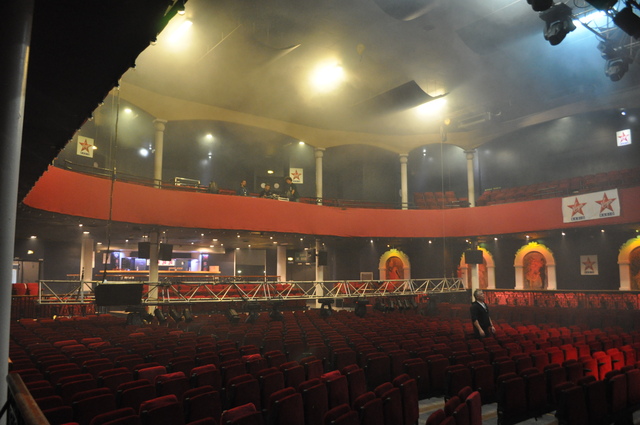 Located in the north of the city centre. In 1864 a 1,500 seat café-concert hall was built by architect Charles Duval, named Ba-Ta-Clan after a famous theatre musical play. The design was Japanese inside, with seating in orchestra and two balcony levels. The exterior façade looked like a pagoda. Films were shown in the theatre in the late-1890’s and early-1900’s.

In 1927 it went over to screening silent movies, but this did not last long. In 1930 the financial situation of the theatre became terrible and the Ba-ta-clan was converted to movies on 3rd June 1932 with Vanda Greville in “Le Train des Suicides” and “Le Chemin du Paradis”. It still included musical acts with some shows. Seating was provided for 1,150. A fire in 1933 destroyed the second balcony.

By 1950, the building was in a bad shape, crumbling and some statuary and other decoration was robbed. The wooden building became so unstable that the police gave the order to close the theatre. A massive renovation that year to the plans of architects MM A. Verry & Ph. Verry installed a new steel framework replacing the original wooden one. A projection booth was built at the first level of a new auditorium in very 1950’s Streamline Moderne style with plaster frescoes on the walls and 900 seats on a single ground floor. The façade was altered and the roof of the pagoda lost its exotic look. Nothing was left inside from the Japanese decoration, but as a second run theatre it was again a very nice neighbourhood movie theatre. By the late-1960’s its location proved to be out of the way and its management had great difficulty finding a programme policy that worked. It closed as a cinema in 1969.

It was reopened by an ex-dancer and former artistic manager of live shows who decided to convert it into a cabaret, with dancing, dinner and a floor show. But this was a flop and the theatre closed again and sat dark for six years. A new owner in 1975 converted the place to a live concert hall and ballroom, the new formula being very successful. Groups such as Genesis appeared here. Sometimes it was also used for live theatre.

The theatre was renovated in 1986 with money from the Ministry of Culture, keeping the frescoes. The balcony, long hidden under a plaster ceiling, was reopened to gave a bigger capacity. The seats of the orchestra stalls could be removed and the stage was rebuilt in order to perform all kinds of shows.

Now the Bataclan is a permanent live concert venue, a bar and restaurant with part of the building renovated with an exotic design. In 2006 the façade was renovated which brought back its original colour scheme.

Some of the original Japanese remains in the foyer, painted over in white, and it is only remnant of the original décor left in the building. With the help of old postcards, it is interesting to imagine how impressive the old pagoda façade was.

On the evening of Friday 13th November 2015 during a concert by the San Francisco based rock band ‘Eagles of Death Metal’ which was attended by a full to capacity 1,200 persons, tragedy struck. Three terrorists stormed into the theatre armed with an automatic rifles and explosives, and took the audience hostage. The ensuing massacre killed 90 people. Two terrorists blew themselves up with explosive devices they were wearing and the other was shot and killed by the police.

The Bataclan was re-opened November 12, 2016 with a concert by Sting.

great article, Xavier. I never heard of this theater until i heard the tragic news. I knew the band that played there, they have a cult following.