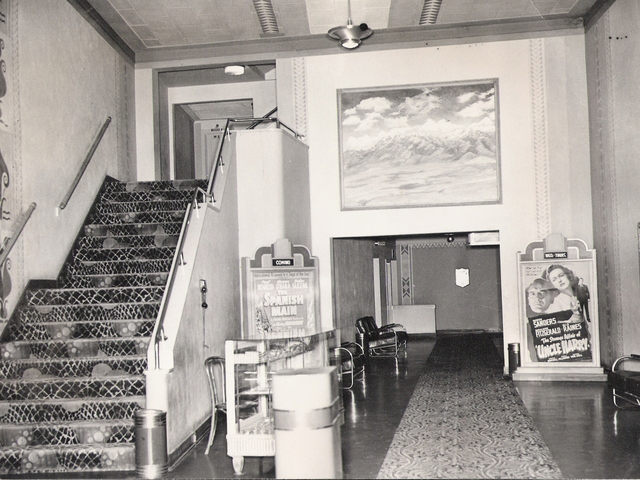 The Lobo Theater opened on August 19, 1938. By the early-1940’s it was operated by Paramount Pictures Inc. through their subsidiary Hoblitzelle & O'Donnell. It reached out to area students and was a premiere venue for independent, classic and cult films. It also hosted concerts with local bands.

The Lobo Theater was closed on August 4, 2000 and for lease, which was taken up by a church.

The Lobo was the last of the great Albuquerque theaters. Catering to UNM students and die-hard “Rocky Horror” fans, it was the last theater in the city that still featured an accessible balcony (The Highland Theater, in operation at the same time, still had a balcony, but it was in poor repair and patrons were not allowed to access it). The last film I saw there was Star Trek VI: The Undiscovered Country. That was several years before it closed. They used to have a great Oscar telecast there. Sadly, this great lady has become a church.

I know the people operating it when i was last there in ‘96 worked very hard to keep it running. I always thought it was the pride of Nob Hill. It’s a shame if the area can’t support it any more.

A 1974 view of the Lobo Theater in Albuquerque.

I find it appropriate that the Lobo should become a church, for it is where I attended a dozen showings of “Gigi,” which I certainly worship.

The Lobo getting ready for the Oscars in 1995:
View link

A Photo I took of the LOBO Theatre back in Nov of 2008 .. Randy A Carlisle – Historical Photographer

Ms. Blanche Hatton, as the family story goes, was the manager of the Lobo. For about four decades. (She was in the theater business when Roentgen discovered x-rays (that’s a joke), and didn’t retire until she was well into her nineties.)

Anyway, back to the story. Miss Hatton was closing the Lobo late one night(she was alone in the theater) when, with the “petty cash box” in hand, she was met with an armed intruder in the Lobo lobby.

“Give me the cash!” the robber demanded.

Miss Hatton hurled the cash box at the intruder. The weight of the contents of the box was sufficient to knock the pathetic, hapless robber unconscious. When the cops arrived, the bad guy was arrested, and Miss Hatton deposited the receipts early the next morning. By the way, she was close to eighty years old when she took out the punk who was 60 years her junior.

Undated photo added courtesy of Anthony Gomez. Looks like the city didn’t care about the placement of their streetlamp.