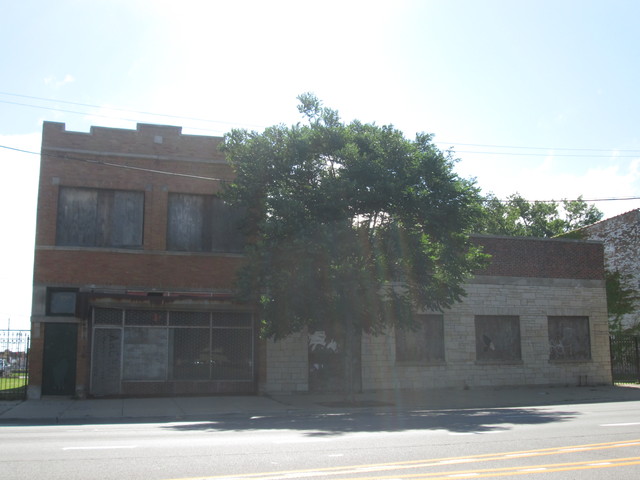 The Atlas Theater opened in 1914 on S. State Street at E. 47th Street, in the Taylor Park neighborhood (not far from today’s I-90/94). This nearly 700-seat theater operated into the 1940’s before closing. Afterward, it was converted over to retail use, and last housed a nightclub, which closed several years ago.

By 2018 only the front of the building survives.

The theater was opened at a cost of $50,000, according to some old newspaper advertisements.

It certainly doesn’t look like it ever cost that much. If it’s the building I think it is, it’s 1-story, with a faux stone and brick facade, with a small terra cotta fragment on the side.

The auditorium seems to have been removed at some point. The lobby and floor seem to remain. It also sort of looks like this started as a smaller theater that was later expanded.

Also, seating may have been closer to 625.
Recent photos of this theatre are HERE

Here is another photo:
http://tinyurl.com/39jcll

I believe this was an African American house. A biography of black filmmaker Oscar Micheaux lists one of his movies, “The Homesteader” appearing at Dooley’s Atlas Theatre in Chicago, on 7-8 March 1919.

The records of the American Terra Cotta Company indicate a D. A. Dooley Dixie Theatre at 4711 S. State Street. The theater was fairly wide, so probably covered three narrow lots, 4711-4715. The project was designed by Newhouse & Bernham.

Looking at the satellite view I’m thinking it’s likely that only the front portion of this theater survives, and the auditorium has been demolished. The building as it is now is not large enough to have accommodated a theater of almost 700 seats.