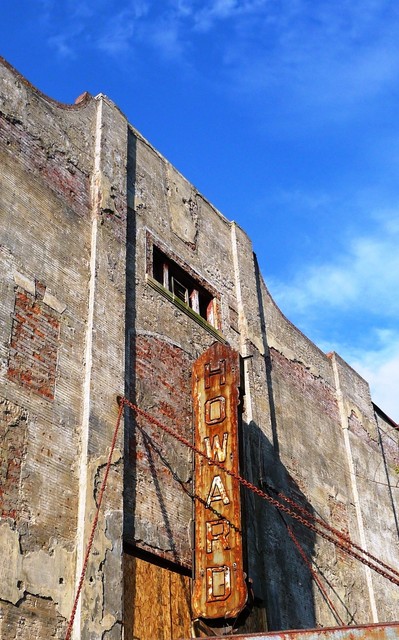 The Howard Theatre opened on August 22, 1910, in a primarily African-American area of Washington, near Howard University (hence the theatre’s name). It sat around 1,200 and was designed by architect J. Edward Storck. It was built for the National Amusement Company. During the mid-1920’s, it was sold to Abe Lichtman, a white theatre owner of theatres that catered to African-Americans.

Its facade was a blend of several theatre styles popular in the era, including Beaux-Arts, Neo-Classical, and Italian Renaissance. At the top of the facade, overlooking T Street, was an over life-size statue of Apollo playing his lyre. The interior was even more extravagant, with a large balcony, eight boxes, a number of dressing rooms, and three entrances.

In its early years, the Howard Theatre featured not only vaudeville, but live theatre, musicals, and local talent shows. The theatre was also home to two theatrical companies, the Lafayette Players and the Howard University Players.

In 1929, with the collapse of the economy, the Howard Theatre became a church for a couple years, before Shep Allen, a theatre manager from Atlantic City reopened it in 1931 as a movie house and live entertainment venue, bringing in the newest and biggest names of the era in black entertainment, including Duke Ellington, a native Washingtonian, who played on the Howard’s grand reopening night. Allen also introduced the popular amateur night contests at the Howard Theatre, at which Ella Fitzgerald and Billy Eckstine appeared. Pearl Bailey made appearances onstage here in the 1940’s.

Other legendary performers, such as Sarah Vaughn, Dinah Washington, Sammy Davis, Jr., Lena Horne and Lionel Hampton played the Howard Theatre during the 1940’s and into the 1950’s. During WW II, President and Mrs. Roosevelt attended balls at the Howard Theatre, which attracted Hollywood stars like Abbott and Costello, Cesar Romero, and Danny Kaye to perform at.

In 1941, the Howard Theatre underwent a massive remodeling, in Streamline Moderne style, complete with a new, sleek, facade and signage.

During the 1950’s, the Howard Theatre became a venue for rock and blues artists, and the audience switched from sophisticated, upper-and-middle class patrons to young adults and teenagers.

During the 1960’s, due to desegregation, and the 1968 riots, the Howard Theatre’s attendance began to decline, and the neighborhood around the theatre began to grow more and more undesirable. The theatre was shuttered in 1970. However, three years later, the Howard Theatre Foundation was formed and funds were raised to refurbish the badly ageing theatre. The Howard Theatre reopened in April 1975 (a year after being added to the National Register of Historic Places) with a highly anticipated night of live entertainment, including Red Foxx and Melba Moore. However, the theatre closed again just weeks later, and was only used sporadically during the 1970’s and early-1980’s as a venue for live entertainment.

For many years, the Howard Theatre sat vacant and in a state of disrepair. Howard Theatre Restoration, Inc. raised funds for its renovation, restoration, and expansion. The revamped Howard Theatre has “state-of-the-art acoustics, video and recording capabilities, along with a deeper stage, basement and additional wing space”. Its cultural status will increase as well with a new addition housing a “600-square-foot museum and gift shop which showcases memorabilia, photos and videos of the astounding array of artists and guests who graced the Howard Theatre in years past”.

My first vist to the Howard Theatre was in 1965 to see Pigmeat Markham and Moms Mabley with the Jewel Box Rev. The next time I was at the Howard was in 1968 as a trombonist playing with the late and great Billy Stewart. Bernard (Butch) White The Bethorns Section

Butch did you have the opportunity to play with the late charlie hampton? After the howard closed he formed a group and played at different venues in the Washington DC area with a singer named Larry Sharpe.

Please DC get the Howard back open!

fond memories of living in the 900 block of T street in early sixties walking to Howard Theater to catch the matinee movie and stage show for $0.90, what a bargain.

This theatre was featured in a recent Preservation magazine. Worth the read!

oh I forgot to mention I recently saw Tangerine Dream in performance at the Howard – great show by the way, and what a beautiful restoration of the theater!

Named one of the “Preservation Wins of 2012” by the National Trust for Historic Preservation. It’s the only theater on the list, but here’s the whole thing for anyone interested.