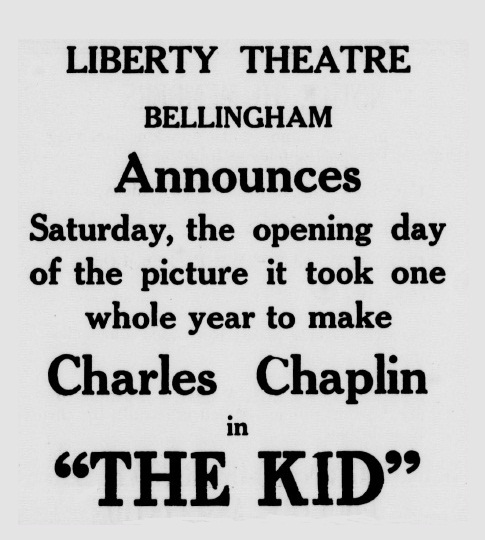 The Metropolitan Theatre was opened by October 3, 1912. On February 14, 1916 it was renamed Liberty Theatre. The famous photo of children attending a November 1921 Charlie Chaplin look-alike contest (with, in the full size version of the picture, Chaplin himself seen in one of the upper floor windows) at a showing of Chaplin’s short “The Idle Class” was taken at this theatre.

According to a Bellingham Herald article about the photographer, the theatre was located at the current site of something they just call the Parkade, whatever that is. This was an average, modest theatre for its day, but still on the higher standards for theatres (and everything else) at the time, better than your average new theatre today. The Liberty Theatre was closed in 1924.

The PARKADE is a four-story concrete structure built specifically to provide downtown parking. There are various businesses located at street level, but it’s rather an ugly structure just the same. Unfortunately, the Parkade turned out to be something of a folly for the city, as it is not as well-used as some thought it would be, people preferring to park closer to the businesses they intend to patronize. I would expect the majority of current clients to be the employees of downtown businesses.

This website had 2 J.W. Sandison photos of the Liberty Theatre. The famous 1921 shot of the Chaplin contest mentioned in the Overview. Plus a second photo from 1921 with D.W. Griffith’s “Dream Street” appearing at the Liberty.

It should also be noted that on the description of the J.W. Sandison Chaplin contest photo in the link above, it was taken November 5, 1921 not 1919 as stated in the Overview. The film was released on September 25, 1921. There is no mention of Chaplin being in the window. Sandison’s own studio was next door to the Liberty at 126 -½ W. Holly. So he was often hired to take the theatre’s PR photos.

This web page with a history of some of Bellingham’s early theaters has a slightly different history of this house. It says that it opened in 1914 as the Edison Theatre, an 800-seat house equipped with an organ. The February 14th, 1916 ad for the Liberty uploaded to the photo page by rivest266 says “Formerly the Edison” on it (the September 30, 1912 ad for the Metropolitan says “Formerly Beck’s” on it, so that ad should be moved to the American Theatre’s photo page.)

The PSTOS page for the Liberty also confirms the Edison aka. The Pacific Coast Architecture Database says that the Edison Theatre was designed by the highly accomplished local architect Frederick Stanley Piper, who also designed the Grand Theatre. The WhatcomTalk page also says that the Egyptian Theatre closed in 1928 and was converted for retail space. The building was demolished in 1969.