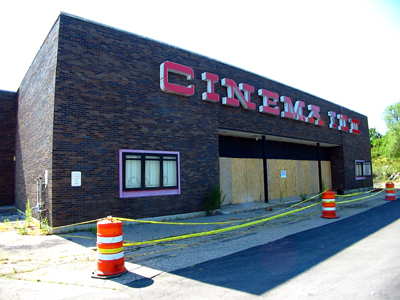 Originally a twin-screen cinema which opened on May 25, 1973. It was designed by William Riseman Associates Architects. The larger auditorium was split in 1978.

My first job was at this theatre in 1980.It had already been split into a 3 screen by then. It was run by General Cinema. No Dolby Stereo,plane auditoruims,and crappy screens. this was one of 2 ‘arm pit’ theatres in Kalamazoo.( Eastowne 5 was the other)
Some of the pictures that ran while I was there : Friday the 13th ( pt, 1 !!), Xanadu, the Shining, Fame, Coal Miners Daughter, Blue Lagoon, The Nude Bomb,( a Maxwell Smart Get Smart for the big screen)
it was a bomb. Herbie Goes Bananas, re release of 101 Dalmations.
I have some pictures, ill scan them and post them here. Really not much to see, LOL.

The theater closed in March 1998. I worked there from 1995-1998. Business was down, every now and then it would have Disney animated movie and do some good business, but then the Kalamazoo 10 opened in the same mall area in late 1997, and the cinema was forced to close. Movies that played when I was there, Pochohantas, Toy Story, Jumangi, Jerry Maguire, Birdcage, Austin Powers, My Best Friends Wedding.

View link
This should take you to some photos.

The original configuration as a two-screener had larger “auditorium” seating 640; the smaller 380.