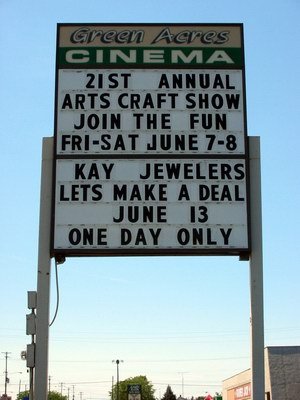 A single screen theatre, built approximately 1969 by GCC, William Riseman Associates, Architects. It became a fabric store which closed around 2006. It then became Lakeshore Rescue Mission in 2011.

When I left Michigan in 1977 it was still a single. General Cinema split it in 1978, and Goodrich took it over in 1984, at which time it flip-flopped between a first-run and bargain house, depending on the prevailing market conditions in the area.

Here is the final word on Green Acres Cinema: Goodrich Theaters ceased operations here in Sept, 1991. After sitting dormant for over two years, I renovated and reopened this theater on November 19, 1993. We ran sub-run until I lost the lease and was forced to close on January 2, 1996. The property was leased to “Linens And More” which had previously occupied a smaller space in the mall. They went belly up after a short time and “Hancock Fabrics” moved into its place and remains there today. I’m gratified by the occasional comment that Green Acres Cinema was, during my brief ownership, “the best theatre in Saginaw”.

Hancock Fabrics closed about 5 years ago. The space is still vacant because the strip mall’s owners kicked nearly everyone out in hopes of luring Wal-Mart.

Was the cinema named after the television series, Green Acres?

I bet this cinema was the place to be?