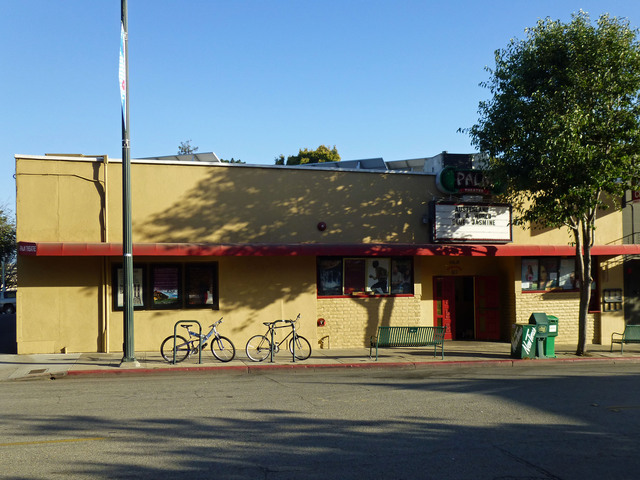 Opened in 1987 or 1988, this little theatre about two blocks west of the beautiful Fremont Theatre in San Luis Obispo shows the finest in foreign and independent films, seven days a week.

It’s kind of a nondescript storefront conversion but we take what we can get.

WOW! I saw “millions” at the palm on sunday afternoon and I was impressed with the style of business they have going on there! First of all, $4 for a sunday afternoon matinee was unbelievable. The price of the concessions was also out of control. The workers were friendly and eager to help. Yes, the theaters are small and you have to walk down a really small hallway to get to some of them but the community feeling and the “not dealing with the corporate BS side of the movie industry and the hords of teenage employees working at the theatre hating their job and taking it out on the customers making my movie-going experience a living hell” was awesome.

The Palm is powered by solar panels. Which is kinda neat.

Here is some of the 2001 LA Times article, no library card needed:

Jim Dee is squatting in the back of a True Value hardware store, surveying a stack of 79-cents-a-foot rolls of clear vinyl tubing. “I’d like 3 feet of that,” he says to the store manager. “In fact, why don’t you make it 4.”

It’s just hours before the big Friday night movie crowd arrives at the Palm Theater here, and the owner of the town’s only art- house theater is busy fixing a leak in the hose of his popcorn concession’s canola oil machine. The Palm is a true mom-and-pop movie enterprise. Dee’s wife, Patty, served as the contractor when the theater was renovated in 1988. His eldest daughter, 16-year-old Nicole, now works part time at the concession stand. And when the popcorn machine’s on the fritz, it’s Dee who makes a run to the hardware store.

The Palm may be 225 miles away from the glamour capital of Hollywood, where lunchtime chat focuses on opening-weekend grosses, but the art-house theater is on another front line of filmgoing: It’s a place where people flock to see good movies. When the theater is swamped, its 49-year-old owner takes tickets himself, steering patrons to one of the Palm’s three screens; the biggest theater seats 135 people, the smallest 50.

Dee has been in the art-house business for more than two decades. He ran a nearby 160-seat theater in the 1980s before converting an abandoned employment development office into the Palm. He bought the building in 1991 and created a three-screen theater in 1993. Dee is a minor celebrity; when we walk across town to have lunch, people stop to say hello and ask what movies are coming to the theater.

But in the competitive world of film exhibition, he’s a small fish in a little pond. San Luis Obispo has a theater glut of its own. As recently as 1990, Dee’s only competition was the Edwards Theatres chain, which had seven screens in town. But in the early 1990s, SoCal Cinemas came and built a theater with seven more screens. â€œThere I was, suddenly going up against 14 screens,“ says Dee. "And to fill up their seventh screen, they started taking movies I would normally play and I was left out in the cold.”

The Palm, like a lot of small businesses, survives on word of mouth. That’s why Dee often hangs around, taking tickets, just to hear what his patrons say when they leave. “When they say they really loved a movie and can’t wait to tell their friends about it, that’s when I say, ‘I’m keeping that movie for another week.”

Right now, business is on an upswing. On a recent Friday night, Dee drove up to the theater just in time to see a line of about 30 people stretched out from the ticket window. “Hey, look at that,” he said excitedly. “We’ve got a crowd!”

Here is another photo:
http://tinyurl.com/y9c2wb8

The best theater in San Luis Obispo, super clean, great customer service and affordable prices. Beats the terrible other theaters in San Luis Obispo, themovieexperience. When I go to the Palm Theater I always get great customer service and movies that are always 4 stars and if you are not satisified they will refund your money even if you watch the entire movie. The place is very clean and the seats are also always clean and people don’t talk or text or put the feet on the seats here, everybody seems to respect this theater so I always go back because it is a wonderful place to go to the movies.

What a crazy policy.if you don’t like the movie you get a refund.You know i have no problem with that if youn watch maybe 10 or 15 minutes,but a whole movie.In all my years only one lady asked for a refund after watching the whole movie ,I tried not to laugh as she walked out the door on the last show of the evening.happened at Columbia 1 theatre in Augusta,well, if you work in the theatre as long as i did you see and hear about everything,and ain’t talking about what’s on the screen,but the public.