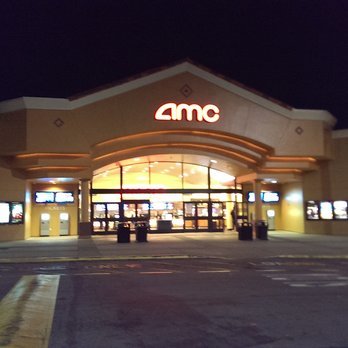 This ten-screen multiplex has traditional seats and has about 1,200 total seats. The boxoffice is small; I believe they have five windows. The main lobby is fair sized and the concession stand was remodeled in 2002. Has about 10+ concession registers. The auditoriums are decent sized with wall-to-wall screens. I think the larger theatres are about 375 seats each and smallest are about 190 seats.

The theatre has a lot more seats. I worked at this theatre from 1992-1996 and in 2001. The remodel was done in 2000 to convert the old main concession stand and 4 self-service stations into one large concession stand. They also redid lobby lighting, and the walls and floors. It now looks like all newer AMC Theatres. It also had 8 box office stations at opening, but after the remodel went down to 5 stations (the 6th in front is no longer used, and the two stations inside are no longer used).

One odd thing to note about this theatre, it is haunted. A Ghost has been seen by many in the projection booth, and lights have turned on mysteriously after being shut off. Theatre 9,10 have been the most haunted. A lady died in theatre 10 during a screening of Twister.

This theater recently has been upgraded to all digital projection. Not too shabby for an almost 20 year old theater that has had a ton of competition open.

Also seat counts need to be updated above.

‘jmarellano" is correct. The Concession stand was remodeled before 2002. I know this because I began working there in 2000 (left in '08) and it was never remodeled during my time there. The only thing they added were two TV’s in the Lobby. How ever they may have changed some things since '08, I haven’t been there since I left.

There is no Ghost. This is just a tale we tell new employees to scare them… and it works. Especially in the Projection Booth. It’s very eerie at the end of the night when there isn’t any noise and it’s pitch black. I’m not denying someone died, but there is no ghost.

The Break Room was a dump. It was basically a Closet with a Table and some seats. They tried dressing it up a bit but it’s still not a great place to hang out. It smells. I think it’s due to the closet next to it. It contains Mopping supplies and such.

During my time I was told by almost every General Manager I ever had that Stadium Seating will never happen at that Theater because of the way it was designed. They have looked into doing stadium seating, but it’s just “Not Gonna Happen”.

Despite this, it is still a good place to watch a flick. Unless you are watching a Kid’s movie or a movie with annoying Teens. But they plague every theater so it’s not a complain against this one.

While I’m usually a fan of any photo vs. none, the picture that is currently attached to this entry (the side of the building?) really doesn’t do much for me… was the front of the building unavailable?

Scott.. working at that theater.. that is the left third of the front. You are looking at houses 1 and to the left 2.

Yeah — seems odd that the entrance was not included.

This opened on November 20th, 1992. Its grand opening in photo section.

The theater was remodeled recently and now has reserved seating and recliners.