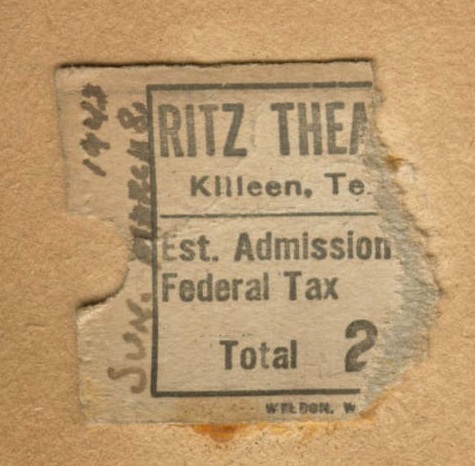 A small theater in Killeen catering to the soldiers of Fort Hood.

I was stationed at Fort Hood during 1966 & 1967. This was the theater I went to when I came into town, especially to buy record albums at the little record store nearby. I wonder if it’s still there ?

I was a soldier stationed at Ft. Hood in 1968 and 1969. I visited Ft.Hood/Killeen 30 years later in 1998 and the building which housed what I believe were the Ritz and the Texas Theaters at 314 E. Avenue D in downtown Killeen was still standing. All identifying signage was gone, but the faÃ§ade of the two theaters, adjacent to one another, was instantly recognizable to me; the poster cases on the front of the building were still there and the same heavy, wooden, entrance doors were intact. To my amazement when I tried the door of what I believe was the Texas Theater, it swung open. Since the two theaters were next door to each other with nearly identical facades, it could have actually been the door of the Ritz. Inside, the lobby which hosted the refreshment stand was unrecognizable; all counters and vestiges had been removed. One of the distinctive architectural features of that theater was that when you passed from the lobby into the auditorium, you had to walk up a slightly inclined ramp, through a narrow door, and then down a ramp into the theater. It must have been designed that way to accommodate the raked seating area. That feature was still intact. Although it was clear that I was inside the auditorium, unfortunately beyond that point it was too dark to see much else or to venture any further.

I have photographs taken in 1998 of the Ritz and the Texas faÃ§ade and when the photo submission application is operative I will try to scan and post a photo.

Directly across the street at number 315 E. Avenue D was, I believe, the Sadler Theater.

They had two Drive-ins there at one time,did you ever visit them?

No Mike I never went to a Drive-In Theater when I was stationed at Hood. Not having a car made that impossible for most of course, unless you happened along with a buddy who did have wheels. Were the Drive-Ins in Killeen? I seem to remember passing by a Drive-In out towards Copperas Cove. Many wonderful memories of seeing movies in the four Killeen theaters, in Temple, Belton, Austin, Copperas Cove, Dallas, and of course in Theaters 1,2, and 3 on base at Fort Hood.

Second to the last photo on this page is a small pic of the Killeen Drive-In.

Thanks RonnieD, you brought back memories from the past for me. I too was stationed at Fort Hood, in 1965 and 1966. Like you I kept a record of all the movies I saw on post as well at the Ritz, Sadler and the newly opened modern Killeen Theatre in Killeen. I just wish I had kept those lists. I remember the loud clatter of the projectors while viewing King Solomon’s Mines and other features at the Ritz. Growing up in the theatre business, I always heard all the sounds from the booth there. The Ritz and the Texas always played double features and the films were usually from the late 1940’s and 1950’s at that time. I remember they had heavy curtains covering the door to the auditorium to keep light from the lobby off the screen and the auditorium was pretty dumpy. But I caught a number of older films at the Ritz that I had never seen. It was always packed on weekends. I never went to the Texas, but thought it probally was about the same as the Ritz.

1972 photo added credit John P. Keating Jr. The Texas Theater was next door to the left at 320 E. Avenue D.