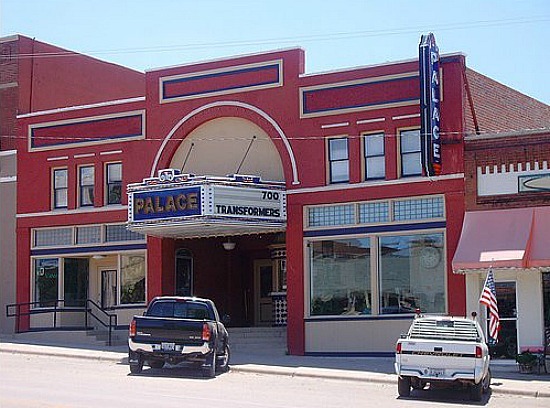 This theatre was originally constructed in 1909 as a vaudeville house named Pastime Theatre. In 1916, it was renamed Queen Theatre and became the Palace Theatre in 1932 and was operated by O.K. Theaters Inc. chain. It has remained a theatre ever since.

The current owner restored and renovated it in 1996, employing the architectural firm Killis Arnold & Associates. I’m not sure how much of the décor is original. The entire auditorium seems to have been redone, save the wooden floor, which still has scars where the old seats were mounted.

I believe the outdoor ticket booth and marquee are reproduction, but the vertical was manufactured by a company that no longer seems to be in business. The theatre has a video store in the old dressing rooms, and a very nice concession stand with generous helpings.

The theatre, and indeed the entire town, are a shining example of what a small town can do besides fold up its sidewalks. And no, the answer doesn’t include Wal-Mart or any other tacky garbage. I must thank the manager, Rob Talley, for turning his neon back on after closing so I could photograph it.

I just looked at the pictures on the Palace’s webite and immediately lusted after this theatre. It looks like a wonderful theatre and many thanks for submitting it. I hope I’ll have the opportunity to see it in person someday. Seth, does it have a balcony and do you know the approximate seating capacity.

This one’s on my list for this summer, too! I’ll post as soon as I visit. I’ve looked in the windows, but I haven’t been inside yet.

The architect for the restoration of the Palace Theater was Killis Almond, of Killis Almond & Associates, a San Antonio, Texas, based firm specializing in the restoration of historic buildings. Click on their “Projects” link to find a link to a page about this theater, as well as links to pages about some of their other theater projects.