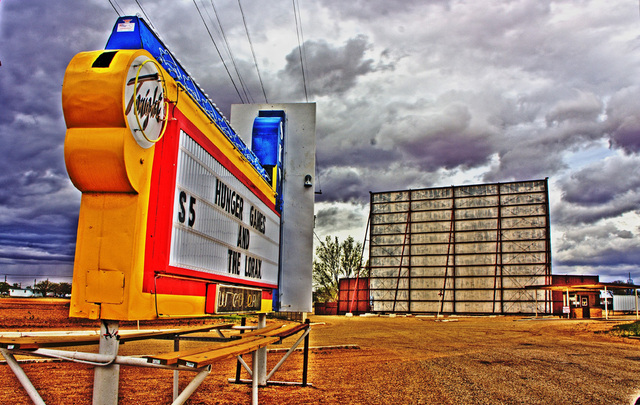 Opened in 1948 with a capacity for 583 cars and seating for 320 walk-in patrons. The Sky-Vue Drive-In is open and thriving in the friendly farming community of Lamesa. It is a great 1950’s throwback complete with playground, swings and merry-go-round. Not to be missed is the snack bar ( also open to the public) featuring the “Chihuahua” sandwich, which was originally concieved and introduced by R.A. “Skeet” Noret and his wife, Sarah. They also built and ran the theater for many years and remain active in the movie theater business.

This was one of many successful movie ventures for the Norets. Sadly the concession building of the theatre was destroyed by a fire on November 27, 2015, putting the theatre out of business.

I have been told by a Lamesa native, that there was another drive in theater north of town. It was torn down when they built the Alco store. Anyone know about this?

I checked the “Mike Rivest Ultimate List of Movie Theaters” site, and two other drive-in theaters were listed for Lamesa, Texas besides the Sky-Vue. The Yucca Drive-In on the Big Springs Highway had the year range ?1950-?1975 listed. The Fiesta Drive-In didn’t have an address listed, but the year range ?1961-?1975 was included. I searched old Topo Maps and found the Yucca Drive-In but not the Fiesta. Where is the Alco store located?

Malcolmdbc39 from the photos on the photo page, it look’s as though there is more damage than just to the snack bar

The Alco was North of town.

Just read in the newspaper, the Kirklands don’t own the land the theater was built on, just the structures themselfs. The land owner does not want to renew the lease for the land so it looks like death for this theater. Probably build another Walmart there.

FDY and IMPA both list a Fiesta Drive-In, Lamesa, TX, from 1957 to 1970. Sky Vu Drive-In and Yucca Drive-In are also listed, so there appears to have been three drive-ins operating in Lamesa.

typed alco stores in la mesa tx into the google maps bar which lead to a dollar general which was next to an auto zone which has vacant land behind the auto zone which appears to have the faint remnants of ramps and the general drive-in shape. hover i can’t find any ecidence that was ever a drive-in here. this is that address.

@dansdriveintheater the lot next door has the drive in shape also. If it was a drive-in theater it may have been a twin.

NPR’s Fresh Air had a 1994 interview with western swing vocalist Don Walser, repeated on Sept. 22, 2006, where he talked about performing at the Sky-Vue on the same night as Buddy Holly.

Walser said, “There was a drive-in theater there in Lamesa, Texas, Skeet Noret had this old drive-in called the Sky-Vue – and, in fact, it’s still operating. It’s one of the last ones that hadn’t been closed down. And he had a big projection room there that he – and he had a little stage on top of it, and he’d bring in guys like Hall Nicks and Buddy Holly, and they would have them come down and play at the Sky-Vue between the movies, you know, and I would share bills with one of them.”

Looks like a time capsule and pretty intact. There wasn’t a No Trespassing sign so I ventured in a bit to get pics. All the kiddie park items are still there, just long grass and lots of neglect.