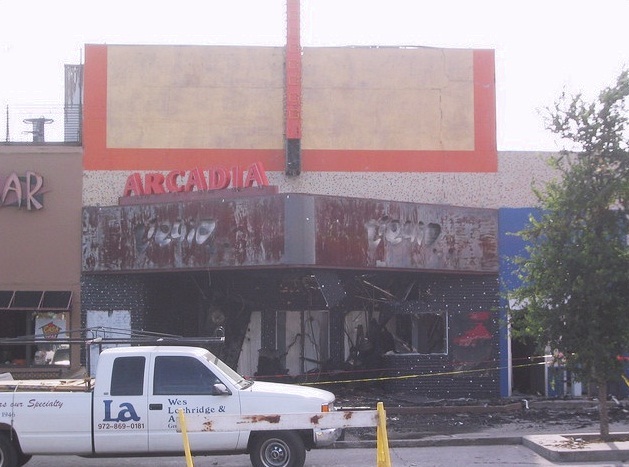 Originally opened November 4, 1927 as an Atmospheric Italian Renaissance style theatre, designed by architect W. Scott Dunne. It had 1,040 seats. It was badly damaged by a fire in 1940.

Rebuilt in 1941 to the plans of architectural firm Pettigrew & Worley. This one is hard to tell about now. The sign and marquee have been disguised, but “Arcadia” was still displayed in red illuminated letters on the north side roof of the building.

After closing it was in use as a nightclub. The building was destroyed by a fire in June 2006.

Here are photos of the demolition:
http://tinyurl.com/2umeby

The Arcadia Theatre suffered a major fire some sixty five years before the conflagration that finally destroyed it. The Arcadia was partly destroyed by fire in the early 1940s, and the auditorium was gutted, but the house was rebuilt.

The rebuilt Arcadia of 1941 was designed in the Art Moderne style by the Dallas firm Pettigrew & Worley. Partner John A. Worley published an article about the project in the June 21, 1941, issue of Boxoffice Magazine. There were numerous photos.

I saw several hard rock / heavy metal acts there in the late 80s including Fishbone, Soundgarden, Slayer, Anthrax, Motorhead, Grim Reaper and Exodus. Anthrax did an in-store at the record store next to the theater and released at least one live track from that show on their I’m The Man EP.

Only time I was in the Arcadia was to see a reissue of South Pacific sometime in the late 1970’s. Unfortunately, I don’t remember what the place looked like inside; I was a regular at the Granada up the street because at the time it was a revival house for classic films.

I took a couple of photos of the 2 story organ chamber building behind the Arcadia Theater. There was a 4 keyboard/14ranks of pipes installed in the theater when it opened November 4, 1927. After sound came in, the organ was finally sent to Baylor University in Waco and was combined with a 2/12 Pilcher organ from the old Hippodrome/Strand theater that had been donated to Baylor Univ. The ranks of pipes usually were about 72 per rank ranging from the size of a pencil to 32 feet tall ones. So interesting how these theater organs were enormous in the amount of parts, blowers, relays and more. Fascinating too were the incredible sounds they could produce.

The original theatre by W Scott Dunne was an atmospheric with 1040 seats and there are photos in Exhibitor’s Herald World 9 Jun 1928 Pages 13-16.

Opened Nov. 4, 1927, Saenger Amusement and Dent Theaters created the Arcadia to be an experimental workshop to perfect theater management skills. Built for just $95,000, the theatre put another 50% into equipment including top of the line Simplex projectors, Brenkert spotlights, dual-dissolving lantern projection for pre-show, and a large Renter 12-pipe organ with echo organ and a multitude of instruments.

The neighborhood Arcadia and Dent would get a plum when the Queen Theatre decided to discontinue a foray as Dallas' first theater to equip for Vitaphone. The management wasn’t pleased with the quality or the release schedule leaving the door open for another Vitaphone theater. When the downtown theater passed, the Arcadia became the Vitaphone theater. Its success would quickly be imitated by the all of the downtown palaces almost instantly except for the Queen.

Two fires would change the course of the original W. Scott Dunne look. One in 1940 leading to a new auditorium in 1941 and the final in 2006 leading to the demolition of the Arcadia.

J.F. Woerner did an architectural job in 1939 as the Arcadia got an addition and brick facing job. Sketch in photos.