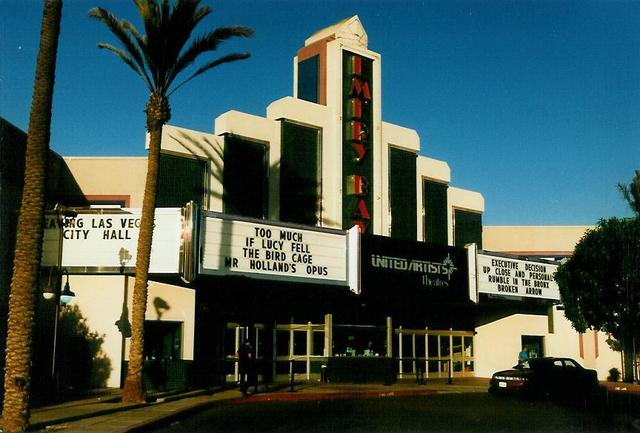 Here’s the Emery Bay in 1996 – looks like it had a different color scheme compared to the more current pics:
View link

Per the box office attendant, the theater’s auditoriums average 342 seats, for an estimated total of 3,420 seats. This number was arrived at loosely, and so I suspect it is actually a bit higher than the truth.

An October 1, 1989, article in the Oakland Tribune indicated that United Artists' 10-screen Emery Bay Theatre complex had been open for some time. The shopping center in which it was located had been launched the previous year.

The article gave the seating capacity as 3,600, but it might be a bit lower now. Currently, Regal lists this house as the Emery Bay Stadium 10, and I’m not sure it had stadium seating when it opened. The Tribune article didn’t mention it. If it has been renovated for stadium seating it’s likely the capacity was reduced a bit.

This multiplex is one of several designed for UA during that period by San Francisco architect Daniel T. Uesugi, of Uesugi & Associates. The firm has designed or remodeled more than 80 cinemas since its founding in 1978.

I visited the UA Emery Bay theater a couple of times while working for United Artists – it did not have stadium seating through those years (1989 – 1997).

I lived in Oakland in 1990-1995 and went to this theater all the time(when a film wasn’t at the Grand Lake of course). It was not stadium seating, but old school decent sloped auditoriums. I must have gone here every other week for 4 years or so.

There were two auditoriums that were THX certified (I think #3 and #4), and both sat about 400. The screens were decent sized, and at the time there were all side masking. There were a few smaller auditoriums, but none that were horrible. This was always a great place to catch a movie during the day, weekend nights it could get crazy busy and kind of rowdy.

They showed 70mm films here! Saw the re-release of Lawrence of Arabia here and another 70mm french film called The Bear. The rest were mostly blow ups from 35mm.

The presentation was good, but the sound was always the fantastic. Would love to see how they changed it to Stadium seating.

A decent theater. Didn’t realize it closed.
Seen about 6 movies there.

This opened on May 12th, 1989 Grand opening ad in the photo section.

The most recent Google street views show this entire area being rebuilt with enormous, boring apartment projects. I hope I never have to see it in person.