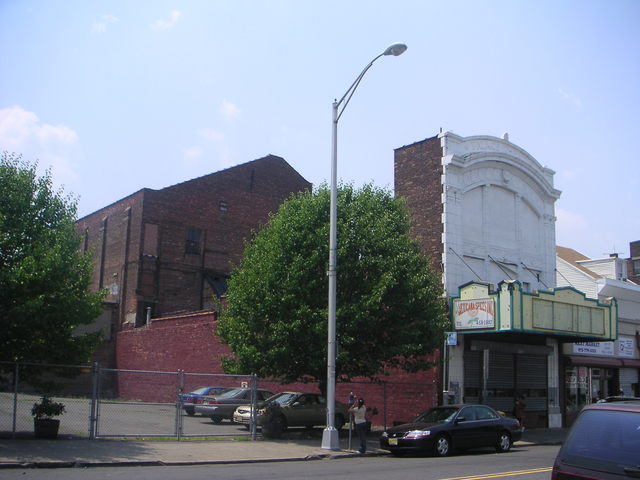 The Palace Theatre is located on Market Street in Passaic. It has a fairly large exterior, and the theatre name is still visible at the top of the facade.

It opened on October 13, 1922 on the site of a previous Palace Theatre which had been destroyed by fire. By the 1950’s it was playing sub-run double features. In the mid-1960’s, it became a church, while still playing Spanish movies. They also had a weekly bingo night. In the 1970’s, it became a full-time gospel church, and seemed to be very popular. At that time, they still had the original marquee, and I can remember lots of neon, although I never saw it lit.

The church moved out, and the building sat abandoned for many years. We were able to finally see the interior in the mid-1990’s when they were gutting it. There looked to be extensive water damage, and one entire wall was completely stripped of plaster and was down to the bare cinder blocks. The projection booth was still intact, and we found a pair of 1956-vintage SuperScope lens attachments, as well as original 1953 film leader from a 3-D print of Columbia’s “Man in the Dark”. On one side of the proscenium, there was a huge neon clock with the Palace Theatre name across the top.

The booth was permanently sealed off with concrete. The balcony was removed, and the floor leveled. The building is now used as a storage warehouse.

I just learned that this theater had 1400 seats.

This theater was built and operated by Harry Hecht who died in May, 1951 in Passaic.

Here is part of an October 1999 article concerning the current occupant:
http://tinyurl.com/ycc6w65

The style of this theater’s architecture is Adam/Greek Revival. I was able to talk some of the employees into seeing the warehouse inside, which was actually the main auditorium. The balcony has been leveled and turned into additional storage. As mentioned, the floor was leveled. The proscenium and stage are still intact, and there is a prominent acoustical dome above the stage area.

The original Palace Theatre launched September 3, 1918 with “The Reason Why.” A spectacular fire beginning in the projection booth totally destroyed the Palace in December 24, 1921. Architect Abram Preiskel drew the new plans with the theatre built in the same spot. The new theatre launched October 13, 1922. Not sure why 1925 is significant in the description above.