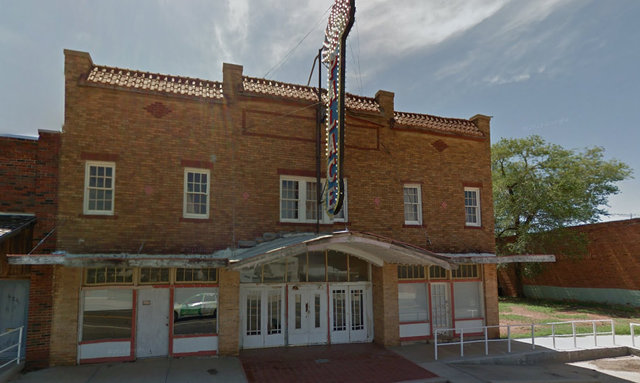 The Palace Theater was opened in 1929. It sat vacant and abandoned for many years until there was a push on to raise money for renovation. It has a wonderful vertical marquee which has survived well. It reopened July 7, 2018 with Meryl Street in “The Post”.

The Palace Theater in Spur does not have a neon sign. The sign which has been lovingly restored by ACME Sign Co. in Abilene, was purchased from a theater in Graham, Tx. in the 1940s. It was handpainted in the 1950s because restoration was too expensive. The man who handpainted this sign is in his upper 80s and currently resides in Spur. The sign was restored to its original colors in 2003, for the sum of $13,500.00. (Funds to restore the sign were raised in just 8 weeks). The theater currently needs a new roof, new plumbing and electrical rewiring. After that is accomplished, restoration is prety much just cosmetic. The theater will apply for historic designation from the Texas Historical Commission and also for the National Historic Preservation Trust designation. There are no taxes due on this building.

The historic Palace Theater in Spur, Texas, proudly presents Rex Allen, Jr. in concert April 2, 2005. Opening for Rex is our own “Patsy Cline”, Ms.DeAnne Roberts, Rex will do 2 shows and tickets are $25.00 each. All proceeds will go to the Palace Theater roofing fund. Seating is limited to 300 per show. This event is sponsored by the Dickens County Historical Commission. For more info contact

Our fund raisers have been “Breakfast With Santa” which turned the theater into a winter wonderland with over 3000 lights. The children didn’t have to travel 150 miles round trip to see Santa. Santa rode up on horseback, with Mrs. Clause and the Elves following in a buckboard. He was dressed in the original Santa suit but wore a black leather vest, black cowboy boots and of course a Stetson.

The sign was restored by selling etched bricks for $40 for families and $75 for businesses that wanted a logo. We raised about $30,000 in eight weeks from this project. Which paid for the sign, the bricks and the etching.

We featured Rex Allen, Jr. in April of this year for two performances and netted about $7,500 from that. I had obtained a grant for $1500 to put towards this event.

Our next fund raiser will be September 10th and will feature the Imitation Stats who have performed for George Bush, Rick Perry and Larry Hagman. They do a rendition of the Statler Brother’s Farewell Tour which is a wonderful show.

Once we get a new roof and replace some of the brick on the back of the building that water has washed out, we will redo the plumbing and bring it up to ADA requirements. We are fortunate to have a local roofer who will donate his labor and we also have an electrician who has rewired the theater for a very reasonable price. Once, the plumbing is complete, the remainder is pretty much cosmetic, but this is where we will need to raise considerable money as I want to put fiber optics and neon on the ceiling.

Big dreams….small checkbook! But we have also been fortunate to have a couple of folks who donated $2000 and $5000 to our cause.

A Booking Request was received on 1/7/06 from Rebecca Stanley, regarding a fund raiser to help restore the Palace Theater in Spur, TX. That is all the information we received. After a little research my interest has increased – enough to find out more. I would like to receive more information before presenting this request to perform. Please contact me via email at: Thank you.

H. Server Leon had many theatres in the area, including Rule, Aspermont, Stamford and Haskell.

Enter 464 Burlington on Google maps and you will see the theater, as opposed to 722.

From 1986 a photo of the Palace Theater in Spur Texas.

New digital equipment to roll out

The silver screen of Spur’s 1929 Palace Theater will once again shine with some of Hollywood’s top stars July 7, 2018, when the theater’s new digital equipment gets its first workout.

The film chosen for the long-awaited debut is the 2018 Academy Award–nominated historical drama “The Post,” starring Meryl Streep as newspaper publisher Katherine Graham and Tom Hanks as Washington Post executive editor Ben Bradlee. Directed by Stephen Spielberg, the film depicts the historic decision of the newspaper to publish the Pentagon Papers against the backdrop of the Richard Nixon presidency, which would ultimately end in the Watergate scandal.

Fittingly, the special showing will be sponsored by The Texas Spur. The movie will show at 6 p.m., and the newspaper office, next door to the theater at 424 Burlington Avenue will hold an open house following the movie with coffee, punch and cookies.

The theater’s new projection and audio equipment was purchased with the aid of a grant from the Community Foundation of West Texas. It allows presentation of films in digital format, a requirement for most current-day feature film distribution. The equipment was installed with the assistance of Josh Watson, technology coordinator at Spur ISD.

Harry Bob Martin, chair of the Dickens Historical Commission, which owns the theater, commented on evolving plans for the Palace. “Film licensing can be a little expensive,” he said, “so we are going to offer up a schedule of movies between now and when school starts.” Ultimately Martin hopes to hire a manager to run the Palace and to generate profits on concessions and box office, he said. “But we will take it a little bit slowly until we get this all figured out.”

“The Texas Spur is proud to sponsor the film that opens a new era for the Palace Theater,” said Spur publisher Kay Ellington. “And we’re pleased to be able to support a movie that depicts the vital role a newspaper plays in keeping the public informed.”

Admission will be $6 for adults and $3 for those under 12. The movie is rated PG-13 by the MPAA for language and brief war violence.

“The Post” represents the first time that Spielberg, Streep and Hanks all worked together on a film. It was nominated for Best Picture and Best Actress (for Streep) by the Academy in 2018, and also received six nominations at the 75th Golden Globe Awards.

The Palace Theater is located at 422 Burlington Avenue in Spur. The movie will show at 6 p.m. on July 7, and the box office and concessions will open at 5 p.m.