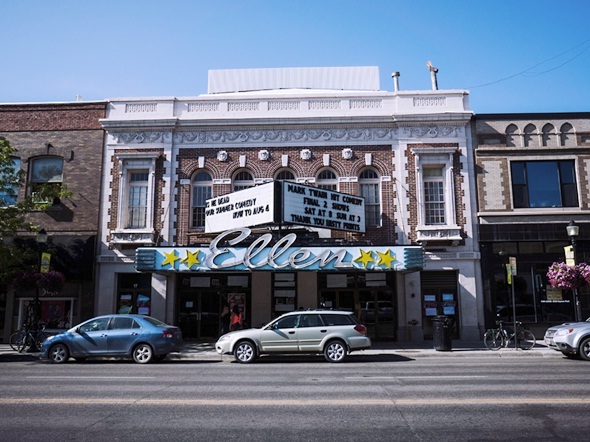 The Ellen Theatre is located in historic downtown Bozeman, Montana. The theatre was designed by architect Fred F. Willson and opened on December 1, 1919. In January 1925, a Wurlitzer (opus #979) organ was shipped from the Wurlitzer factory and installed in the theatre as a Style E X (two chambers). The organ is still playing at the theater.

The Ellen Theatre was named after Ellen Trent Story, the wife of Nelson Story, who settled in Bozeman in the mid-1800’s. He drove 3,000 head of cattle from Texas to Bozeman, which formed the beginnings of the cattle industry in Montana.

Last operated by Carmike Cinemas, the Ellen Theatre closed in June 2007. It was purchased by a local theatrical group called Montan TheatreWorks. After several months of refurbishing and construction, the theatre reopened in December 2008. It is now a thriving showplace for the community, hosting plays, musicals, concerts, film, school events and fundraisers for local non-profits.

Here is an article from June 2007. The theater may be closed:
http://tinyurl.com/2wcy64

No showtimes listed as of today. Here is another photo:
http://tinyurl.com/3du7vf

From the 1930s a photo of the Ellen Theatre in Bozeman.

Wasn’t it called CINEMA ONE in the Early Seventies.I have “LONGEST YARD” playing Christmas day at the Cinema One.

That is so strange.But I believe you when it comes to small towns! Looking at the ads one day it is the Ellen theatre next day one sees Cinema One.Guess they had no advertising Budget.thanks.Iam glad i did not submit a New Theatre.LOL.