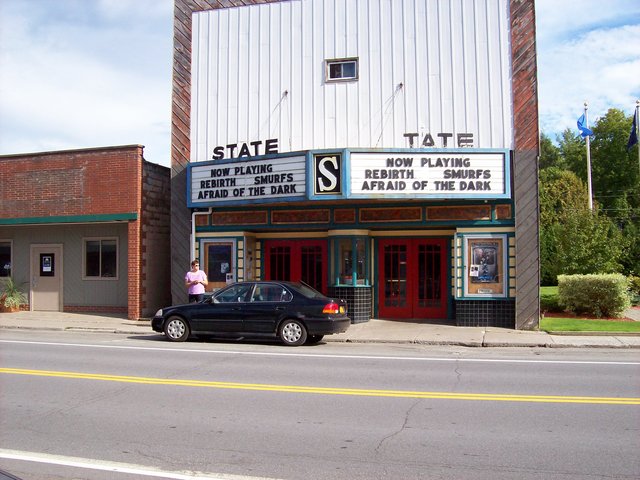 The State Theatre is a small plain village theatre that recently acquired a new owner and a new format. After years of being a second run house, the State Theatre is now a first run theatre. The new owner has increased attendance through first run films and has twinned the theatre by converting the small balcony into a second theatre. Seating is now provided for 135 in the former orchestra level and 68 in the former balcony level.

The 1930’s or thereabouts renovation added a tiled facade which is Art Deco, but the exterior housing the auditorium can kindly be described only as “very basic”.

Sally, the new owner and sucessful restauranteur, is a former projectionist who sounds like she has the energy and expertise to keep the State Theatre a viable theatre.

THIS THEATRE NEEDS TO BE UPDATED

It was twinned in 2005. Tupper Lake is declining in population and it’s really hard to stay open all winter. I’m the owner—and go to work downstate to keep it going…there are some renovations planned soon, keep tuned!

We have just raised enough money to go digital! My quotes are done and orders are just going in! The community stepped in and helped us convert…also we got a grant from the state (for small businesses, not for theaters only) which was a large part of what we needed. Next year our theater turns 100 years old…and it will be thriving for its hundredth birthday!

I see that you are temporarily closed for installation of the digital equipment. Do you have a date for the reopening?

I am currently waiting for the arrival of the equipment…it is arriving from all over, including being imported from Canada. Once it all arrives, installation should take no more than a week assuming no problems! I’m hearing the new silver screen for the 3D downstairs will be the last to arrive, sometime early in November. So 3D may be a bit later. We just also had a new boiler put in…which will keep us warm all winter!!

I couldn’t be more excited for what this all means to the theater and to Tupper Lake!!

The Warrensburgh News of November 24, 1927, had an item about improvements to the Palace Theatre in Tupper Lake. The lobby had been doubled in size, the boxoffice moved to one side of the entrance to provide five exit doors instead of the previous two, the sidewalk had been rebuilt to eliminate stairs at the theater entrance, and a new marquee with eighty electric lights had been installed. The project had cost $5,000.

I have found references to a Mr. William A. Donovan being the operator of the Palace Theatre at Tupper Lake as early as 1915 and as late as 1931.

On October 21, 1968, the Watertown Times ran the obituary of Mrs. William A. Donovan, saying that since her marriage she had assisted her husband in the operation of Donovan’s studio gift shop and the State Theatre, so unless this Mr. Donovan was the son of the original owner, he must have operated this theater for more than half a century.

On April 5, 1923, Variety published a brief article that included this information: “Tupper Lake will be scene of picture opposition. A second house is being created by F. G. Pond, of Malone, backed by local capital.” I don’t know if Mr.Pond’s theater was built. In 1924, issues of Variety indicated that he was in financial trouble, and had been obliged to stop selling stock in his company that had intended to build theaters in several small towns upstate. In any case, the item indicates that, as of 1923, there was only one movie theater operating in Tupper Lake.

I did find an article that described the interior…it was hard to read the scan but I did make out that describes honey taupe drapes inside, new screen, new and larger screen, ceiling canary yellow with lettuce green trim. New tiled floors in lobby in pleasing blue and grey colors, new ticket booth in front, comfortable bathrooms to the side, and the most startling change, the new Schine’s State Theater marquee. This was in the Tupper Lake Free Press on March 7, 1935.

I’ve been trying to find photos of the old interior but have had no luck, so if anyone out there has anything, let me know? Thanks!!