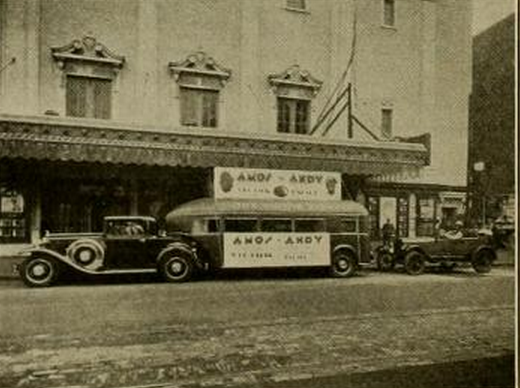 Opened in 1919, the Palace Theatre was an early theatre design by local architect, Roy A. Benjamin, who also designed the Imperial Theatre down Forsyth Street (Benjamin earlier designed Jacksonville’s Arcade Theatre, later renamed the Center Theatre, as well as the opulent Florida Theatre some years later, also on Forsyth Street.) The Palace Theatre, which seated nearly 1,900, was built for S.A. Lynch of Asheville, North Carolina and was originally part of the Keith vaudeville circuit. Around the time it opened, it was called “The Theater Beautiful” and “Equal of any and peer of many in the East”.

During the 1920’s, with vaudeville on the wane, the Palace Theatre became a movie house, though after the larger and much more ornate Florida Theatre opened in 1927, the Palace Theatre’s days as the premier movie house on Forsyth Street were coming to an end. By 1941 the Palace Theatre was operated by Paramount Pictures Inc. through their subsidiary E.J. Sparks. The theatre survived until 1956, when it was demolished along with the nearby Imperial Theatre. A parking garage is now on the site.

The street address for the Palace Theatre was 32 East Forsyth Street. It had a seating capacity of 1,878

I was an usher at the Palace Theater from 1946-1948. It was one of the many theaters iin jacksonville that was owned by Paramount theaters, Inc. Paramount owned all the downtown Jax theaters except the St John (WB) and the Casino (ind). The palace was remodeled in the early 1940’s. The second balcony was blocked off with a drop ceiling. Air conditioning was added and the theater took on an art-deco/modernist theme. Periodic stage shows (Eddy Arnold, Blackstone the Magcian and others) continued until I left in Oct. 1948, EDDY66

I saw the first 3-D film here —“Bwana Devil” and the theatre was packed. I also saw “The THING"
which to me (at eleven) was so scary. To advertise the film I rmember they had a coffin outside the theatre with a voice coming from inside with screams saying the thing is coming.

i’m searching for some information about a Vaudeville show that may have performed at the theatre in the late 1920’s somewhere between 1927-1929. The show was called “Jungleland” which was a traveling contortionist show. If anyone could help out, that would be great.

From the the 1940s a postcard view of a busy Jacksonville street along with the Palace Theatre.

So very sad that all theatres except the Florida Theatre still stands on Forsyth which was once “The Great White Way” with many theatres. And to learn that the theatre architect, Roy Benjamin’s home on Riverside was demolished is truly a crime. Benjamin built a theatre in Lake Worth FL which still stands today!