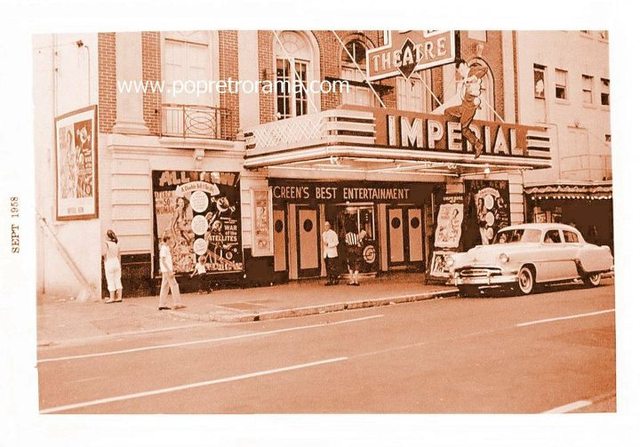 An early theatre designed by Jacksonville architect Roy A. Benjamin, the Imperial Theatre was located on Jacksonville’s “Great White Way”, Forsyth Street (along with the Florida Theatre and Palace Theatre, both designed by Benjamin as well).

The information above that the Imperial closed and was torn down in the 1950’s is incorrect. It was still going strong during the ‘60’s as a 2nd run movie house. When I was in junior high school I often went downtown with my best friend to this theatre for horror movie double bills. The Empress theatre was right next door, a smaller theatre with similar bills. I remember seeing many of the Roger Cormon Edgar Allen Poe movies at the Imperial (Fall of the House of Usher, etc). It was not a movie palace like the Florida Theatre a couple of blocks away, but it still had vintage theatre charm from the pre-mall, pre-multi-plex days. Both the Imperial and Empress were still operating when I went away to college in the fall of 1969 and they continued to show movies for at least four or five years after that. As I moved to another part of the state after graduating, I lost track of such things, so I can’t say just when they shut down and were razed.

There was always a double feature. Alot of Cowboys (Gene Autry, Roy Rogers). It was owned by the Florida State Theatres (which used to be Publix / Paramount) which also owned theFLORIDA,PALACE,ARCADE,IMPERIAL,CAPITOL, BRENTWOOD,EMPRESS and I think the FAIRFAX, also the SAN MARCO and the EDGEWOOD — all In Jacksonville

From the late 1930s a postcard view of Forsyth Street along with the Imperial and Palace Theatres in Jacksonville.

More photos of The Imperial are available on the Facebook page Pop Retrorama. You can also read about some Florida theaters and drive-ins on www.popretrorama.com where we celebrate all things related to vintage pop culture.

Two theatres for one parking garage is not a good trade off!

A house called the Imperial Theatre was expected to open in Jacksonville on May 20, 1911, according to an article on this page of the issue of The Moving Picture World dated June 3 that year. As no address was given for the theater I don’t know that it was the same Imperial. It was smaller, seating only 700, and was designed by local architect James R. Walsh.

It’s possible that it was the same Imperial Theatre, and it was later expanded. The description of the front in the 1911 article doesn’t match the vintage photo of the facade we have, though, so any remodeling would have been quite extensive. The May 27, 1916, issue of Motography said that improvements would be made to the Imperial Theatre, but gave no details about the project. At least some alterations were carried out at that time, as the January 1, 1917, issue of American Gas Engineering Journal said that the Jacksonville Gas Company had installed a modern heating system in the new Imperial Theatre.