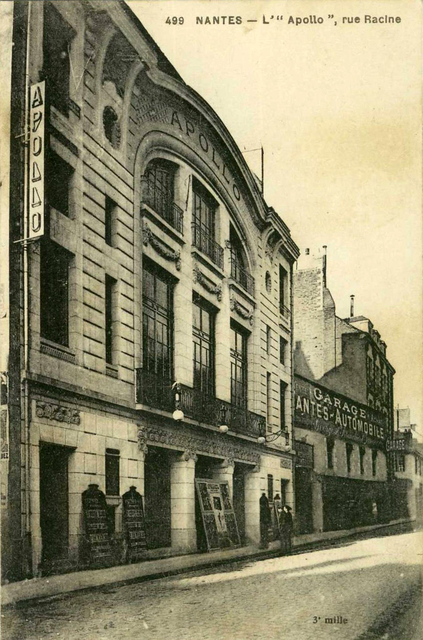 The Theatre Apollo was opened in 1908 with seating provided for 1,700 in its large auditorium, with two balconies, stage and orchestra pit. It was screening films by 1921 when it was badly damaged in a fire. It was renovated and re-opened with 1,050-seats, operating as a theatre, music hall and cinema.

It was modernised in 1951 to the plans of architect M. Peynet. It was run by an independant owner and attracted stars such as Maurice Chevalier, Mistinguett, Edith Piaf, Fernandel, Yves Montand and Coluche. It was divided into 5-screens in 1976, at the beginning of the multiplex era, and was one of the first five screen movie theatres in the Nantes area. It was taken over by the UGC chain in 1984. Also in 1984 the Cinema Racine directly across the road at 22 Rue Racine was converted into a twin screen cinema and was merged with the Apollo Cinema, becoming the Apollo 7.

The main auditorium had a 519 seat capacity and showed first-run films. But in the 1990’s, two huge multiplexes were constructed in the suburbs of the city, one by UGC. The Apollo Cinema survived the competition with a policy of second-run movies at bargain prices.

However, after the opening of a multiplex by Gaumont in the center of the city, the theatre was not profitable anymore and closed in 2003. The Apollo was demolished in 2004, but the façade was saved, now serving as an entrance to a gymnasium named Cocoon Studio.