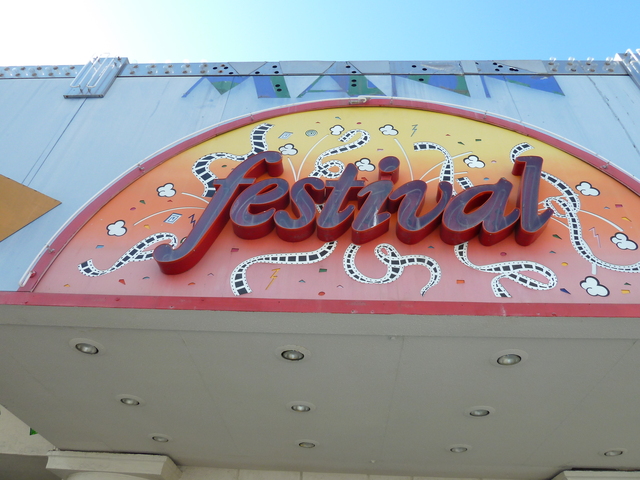 The UA Theater Westwood opened on April 23, 1969, in a building that opened in 1929 as one of Westwood Village’s first six buildings, and had housed the first Ralph’s supermarket. Its understated exterior matches its simplistic, but comfortable auditorium.

The building was placed on the National Register of Historic Places in 1992.

To see old (1970’s) and new footage of the Festival and other Westwood Village movie theaters past and present, check out this musical tribute to Stan’s Donuts on youtube:

Anybody know EXACTLY what’s gong on with the Mann Festival now. It seems to be just sitting there…

It’s just sitting there. Topa Management still has it and the neighboring buildings waiting for someone to lease the space.

This is the the former location of the UA Westwood. The Rocky Horror Picture Show made it’s US debut at this theater on September 26, 1975. The very first rumblings of the Rocky Horror audience participation phenomena started in this theater with audience members returning for multiple repeat viewings. On October 30, 2015, the City Of Los Angeles proclaimed the date as “Rocky Horror Picture Show Day”. A ceremony was held here to commemorate the film’s US debut 40 years earlier. Tim Curry, Lou Adler, and Rocky Horror Fan Club President Sal Piro attended, along with a large crowd of fans. A memorial plaque was dedicated and will soon be mounted on the structure. Don’t Dream It. Be It. https://www.youtube.com/watch?v=f1h3oPTaNKE

Ran inside the Mann Festival briefly while the doors were open for a routine air out. Seats gone but Mammoth screen and decor still intact! Looked so grand…even in the dark! Hopefully this theatre will see the light of a projector again.

“youtube UA Theater Westwood Animal Crackers” typed into a goggle search brought the May 23, 1974 Animal Crackers re premiere video up. There is no sound and Marx is wearing a pith helmet and smoking a cigar.

“Groucho Marx and companion Erin Fleming arrive at the May 23, 1974 repremiere of ANIMAL CRACKERS at the U.A. Westwood Theater. The campaign to get ANIMAL CRACKERS back in theaters after it was tied up in litigation for decades was spearheaded by UCLA student Steve Stoliar, who later became Groucho’s secretary. Also shown are ANIMAL CRACKERS director Victor Heerman, Groucho’s longtime publicist Bill Feeder, and rocker Alice Cooper. At the end is footage of the news story on a TV set. (This silent, Super 8 footage was taken by Michael W. Johnson.)”

When did 70mm projection get installed here? Was 70mm in place from Day One, or was it installed years later?