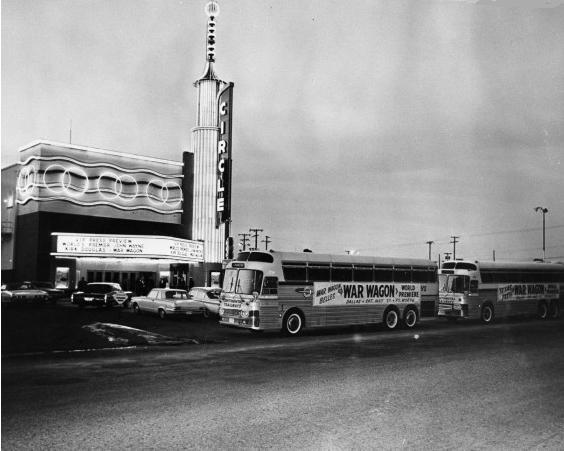 Built in 1947 and named after the long gone Harry Hines traffic circle, the lonely building is still standing in good condition surrounded by a huge parking lot and wire fence.

It must have really stood out with its huge towering column on one corner of the building that originally accommodated the Circle name. Its broad marquee and lots of neon have also survived. It is situated on Storey Street between Harry Hines and Denton Drive. By November 2016 it been converted into a live music venue named Stereo Live.

matt54.. sorry for the long delay in the return response. Yep, I shoot when-ever & where-ever I can. I now have 3,000 photos up on my flickr pages! www.flickr.com/photos/racphotography .. Enjoy! RAC Photography

matt54.. sorry for the long delay in the return response. Yep, I shoot when-ever & where-ever I can. I now have 3,000 photos up on my flickr pages! www.flickr.com/photos/racphotography .. Enjoy! RAC Photography

I pass this theater on my way to work. It looks like it is not a functioning business anymore. Does anyone know who the owner may be and if it is, in fact, “in business”?

Some photos I took of the Circle Theatre 2006 .. Enjoy… Randy A Carlisle – Historical Photographer

Featured on the discovery channel show “fast and loud”. Vertical sign has the word carnival on it now.

Dallas had two Circle Theaters. The first was downtown and can be found in the entry Joy Theater, its final name. But to people who may have seen the second of the Circle Theaters still standing in the 2000s, it appears that a building was constructed in the middle of nowhere with few buildings and no housing nearby. When built, it was part of a fun retail experiment around the Tom Field Traffic Circle – hence, the Circle. The 1,000-seat theater was architected by Pettigrew, Worley & Co. and was colorful with its neon interlocking circles on the outside and its crazy murals on the inside. The theater fit the area perfectly.

A carnival-like opening with Ernest Tubb in person outside, a thirty minute live radio program promoting the opening, fireworks and the film, “Welcome Stranger” were all included in the Circle’s launch on October 30, 1947. A newsreel of the capacity drawing event was shot.

In 1962, Interstate instituted a family-only film policy. But by 1968, the theater did a 180 and went all adult / art and downgraded to a weekends only operation. The theater announced a six-week weekend test group of films from January-February to determine interest in the Circle. Apparently, there wasn’t much because the theater closed on March 2, 1969.

In 1974, the Circle became a nightclub called The Old Theater with multiple levels with films playing on various levels, movie posters and movie photographs throughout. And unlike its predecessor, it provided free popcorn. That was followed by a live music venue called the Circle Theater. That was followed by an urban cowboy inspired disco called Cotton Eyed Joe’s complete with mechanical bull. That was followed by the Ritz Club / Ritz Rock and Roll Club. It was then the Dal-Star Bingo hall with the CRCLE on the outer sign replaced by BNGO.

Things get a bit dicey as the building is home to a variety of places. It was a Hispanic place of worship; it was the Baby O All-Stars / Baby O Disco Tec (2009) / Baby O Tejano Night Club; and potentially its last occupant was a Latino nightclub, Club Carnaval, which lit of the theater until late 2012 which – while a marked departure from the original interior – was just as festive and colorful as it had been in 1947. A wrestling match by Lucha Libre in 2013 was the last known event in the space. The fence around the property in 2013 suggested an uncertain future.

Drove by the other day. It is now a Stereo Live which features EDM performances. You know, DJ’s playing drum tracks with sequencers via laptops for drug-addled young people. Not my thing but better than a bingo hall.

Google has loads of photos (and some videos) from Stereo Live Dallas, many of them quite recent, and many apparently posted by DJs who have presented shows there. The original auditorium interior has been stripped and black-boxed, but the lobby has many original features intact. Judging from the size of the crowds in many photos it looks like business is thriving.

Facebook page for Stereo Live Dallas. Some theatre photos if you scroll past promotional ones. Website below that shows there is also a Stereo Live Houston, but not inside a former theatre.