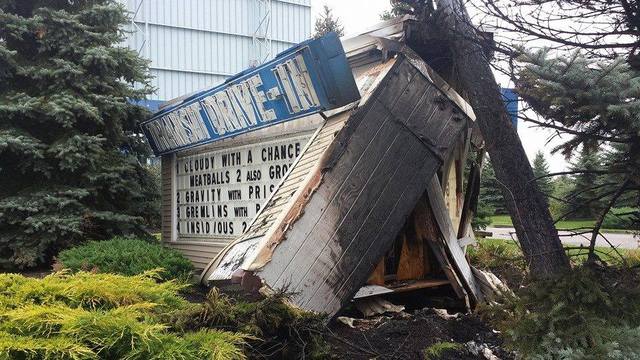 This is a family owned drive-in theatre located in the town of Lockport near Buffalo. It was opened August 1, 1952 with James Stewart in “Carbine Williams” & Walter Pidgeon in “Calling Bulldog Drummond”. It was operated by Anthony Regusa and had a capacity for 350 cars in its single screen. It was later expanded to 4 screens. By early-2017 it had 5 screens. It was taken over by Dipson Theatres in March 2022.

The link above is an article from .the Buffalo News about the Transit Drive-In

LOCKPORT, N.Y. (WIVB) – The lake effect blast that buried the Ralph, forced the Buffalo Bills to move their home game against the New York Jets to Detroit. As a result, a special tailgating party was held at the Transit Drive-in Theater in Lockport Monday night. Fans were chanting, tailgating, and cheering on the Buffalo Bills in the lot. “We’re all one. The team and the fans are all one,” fan Matt Rosenhahn said. Some fans said they wanted to see the game in Detroit, but couldn’t make it there. “We were going to go to Detroit and we decided we couldn’t make it. So we were going to come here because there’s going to be a bunch of people,” Kevin St. Laurent, a Bills fan said. “We tailgate every week and we couldn’t make it out to Detroit,” Dan Frisicaro, a Bills season ticket holder said. Frisicaro had the grill going, flags up and brought the cooler and chairs to the lot. “This is the only chance you get to see the Bills on a screen this big.” Fans said this was much better than watching the game at home. “You know what, at home you don’t get as much of an atmosphere,” Rosenhahn said. “This is good, because you’ve got the Buffalo fan camaraderie going on right now.” “I’ve got my cousin in town and he’s from California. I wanted to give him a Bills experience and this is the closest we’re going to get,” DJ Mocarski said. Anthony Mocarski of California said the atmosphere at the drive-in was great. “Even though it’s a little cold it doesn’t bother me. I’m just happy to be out here with some of the best fans Buffalo has to offer.” Diehard fans explained they were happy to cheer on their team whether it was in Detroit, at the Ralph or at a drive-in. “Go Bills!” Frisicaro said. Admission was free at the drive-in and all proceeds from the snack stand went to the Buffalo City Mission

Ulrich Signs built them a gorgeous marquee in 2014.

A 2015 story in The Daily Beast liberally quotes current owner Rick Cohen in describing the Transit’s history of a sometimes-porn theater in the 1970s.

The snack bar was gutted by a fire in the snack bar on 7/8/1973 reported about 3.10pm(possibly started in the newly installed french fry unit). The fire also slighty damaged the projection booth, but thats nights movie “Last tango in Paris, was still screened. Screen 2 opened in 1994. Screen 3 opened in 1996. Screen 4 opened in 2001.

The Transit Drive-In has been a safe and popular destination for family entertainment during Covid-19, but the uncertainty and sudden loss of life the pandemic has brought led third-generation owner Rick Cohen to a major life decision.

After 65 years of Cohen family ownership, and 35 years in which he worked as manager and later sole owner, Cohen has reached an agreement to sell the Lockport drive-in to Dipson Theatres, which plans to continue operating it as a drive-in.

Dipson began running the theater in March under a management agreement, with Cohen assisting the staff during the transition. The sale is expected to close in late spring or early summer. Cohen would not disclose the terms of the sale.

“I’ve had friends my age drop dead of a heart attack,” Cohen said. “They worked and worked and worked, and one day they were gone. After the last two years of Covid, I decided I don’t want to work until I’m no longer able to work, and I want to be able to enjoy some quality retirement time.”