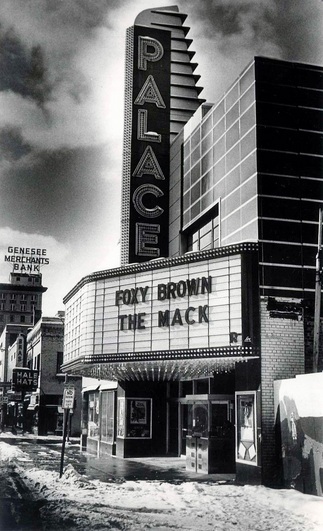 The Palace Theatre was built in 1917 for the Butterfield Theaters chain. It seated 1,348. This theatre and the Capitol Theatre just two blocks South were the two first run movie theatres in Flint. The Palace Theatre went through a renovation in 1950 both inside and outside to the plans of C. Howard Crane & Associates. The renovation removed the previous ornate design and replaced it with Art Deco style decorations.

It closed in 1976 to make way for the University of Michigan-Flint campus. It was demolished in 1977. There was a plea to save the theatre building itself but it was determined that it would be too costly to save the 60 year old building.

The Palace used to have stage shows every Friday night. It aired on W.T.A.C. radio. They had a talent show (Yes, Flint had talent too and their own American idols). Smiling Max Henderson was the MC who had a daily radio show on W.T.A.C. Tiny Don Faulkner (who wasn’t too tiny), played the accordion. He also played schools with Ltn. Lagree who sang safety songs. Russ Waters was on the electric steel guitar. He taught guitar at the Honolulu Conservatory of Music near the Flint River Bridge.

I got to know Max from his daily radio show. I used to go to the station when I got out of school. So, when the Cowboy Jamboree started at the Palace, I would go there after school and save three seats for three of his fans, in the front row. The program started at 9:00 which meant I had to watch the feature film twice. But, I always had the three seats saved every week. The theater filled up every Friday night. They made so much money that they closed down and renovated the front and the interior. It looked good and they always had slopped floors, similar to stadium seating today. But, after they remodeled, they canceled the stage shows.

It was first run like the Capitol. Art black was the manager. He had worked for Paramount Studios creating names for movies. Someone stole some of his ideas so he moved to Flint and managed the Palace. He always looked like a manager, nice suit and always had a cigar in his hand. He did the candy inventory after hours, alone.

The Palace had a lot of movie stars appearing in Person. The line for Sal Mineo stretched around the block. He was there for his film, “Dino.” His brother Mike was with him. I got to know Mike in Hollywood. He too is gone now. Yes, the Palace could still be operating. But, like most cities today, the younger generation don’t seem to care about saving historical buildings.

C. Howard Crane & Associates was the architectural firm that designed the 1950 renovation of this theater.

Clarifying the architects of C. Howard Crane & Associates who designed the 1950 renovation of this theater, the architects from that firm who did the actual designs were Elmer Keihler and Dixon Kellogg. The original 1917 design was by Chicago architect “John W. Everson.” I wonder if that is a misspelling of the legendary theater architect John Eberson.

I now believe the original architect of the theater was John Eberson.

Don"t you just love the fascade and marquee of the palace.

That date for the picture is incorrect. “The Furies” was released in 1950. The automobiles in the picture date from the late 1940s and early 50s.

You are correct. And I am a 40 year collector car hobbyist and missed that… There was a second image that included a dated description with the photo credit. I will delete and re-post it.

The upside is that that proves the photo was from the Palace’s 1950 reopening after it’s renovation mentioned in the Overview.

Interestingly, the theatre was designed by John Eberson in association with C.W. and George D. Rapp and remodeled by C. Harold Crane. A triple play of big names.