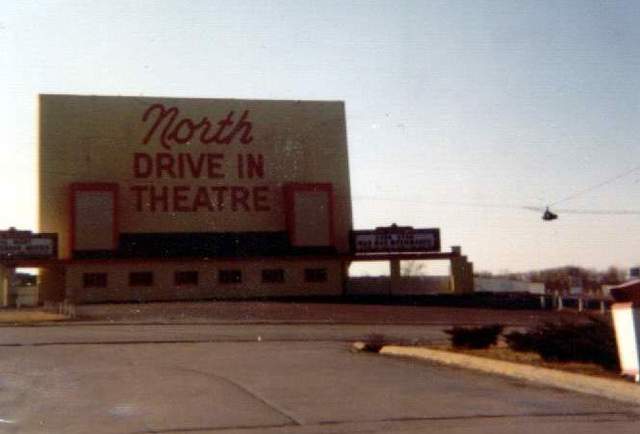 The building permit was issued to the Northside Amusement Company which was owned by Clarence and Francis Kaimann in addition to Fred Wehrenberg. The Kaimanns, in St. Louis exhibition, are remembered for their many theatres in North St. Louis.

Wow, the stories I could tell from my times at the North Twin…ummm, I’d better not….

For the record, the North Twin was the last remaining drive-in theater in St. Louis County when it closed in 2001.

another note, i was a projectionist at the north and it sat on more acre’s than any other …..50 acre’s the even covered the area on 367 where the gas station sat….

The St. Louis Post-Dispatch reported on Feb. 22, 2002 that Wehrenberg Inc. had sold the North Twin to a real estate developer that week. It also mentioned that it was in Jennings, and (as Kyle Muldrow noted above) was the last active drive-in theater in St. Louis County.

The North Drive-In launched on September 17, 1948 with Sonja Henie in “It’s a Pleasure” supported by a Three Stooges short and a Walt Disney cartoon. The single screen D-I became the North Twin on August 23, 1974 with triple features on both screens (American Graffiti/Oklahoma Crude/Something Big on #1 West and Thunderbolt & Lightfoot/White Lightning/Serpico on #2 East). The North Twin closed on September 16, 2001 after double features of “Rush Hour 2” and “Jeepers Creepers” on Screen #1 West and “Two Can Play That Game” and “Ghosts or Mars” on Screen #2 East.

Motion Picture Exhibitor, Feb. 21, 1962: “The North Drive-In, which opened Feb. 2 for the season, is being taken over by the Wehrenberg Circuit.”