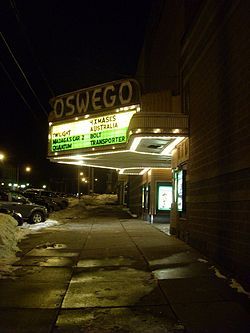 Originally on this site stood the Hippodrome Theater which had opened prior to 1910. The Oswego Theatre was built in 1940 for M. Shapiro and Sons and opened on January 22, 1941. The architect was John Eberson. The theatre is now known as the Oswego 7 Cinemas, having since been split into seven screens. It is also listed on the National Register of Historic Places.

They got a good shot of the marquee…especially the underside. The Norwalk has the same patterning, but is more elaborate. They have more lighting underneath as well.

Oswego had more bulbs and neon all over the marquee, too, it just broke and wasn’t replaced. And the letters used to be all the same size.

Additional detail about the divisions of the Oswego Theatre, from my own memory augmented by a report from a current local resident…

Seating upstairs and downstairs was originally in three sections, center, right and left, and there were four aisles, allowing access to each section from both sides.

The original Balcony was separated from the main floor by putting a wall up to the ceiling from the edge of the balcony. What used to be the front section of the balcony (about 4 rows) became a little pit with lights on the floor aiming upward at the curtains. Plain curtains on the front wall right and left. The screen, directly in front of the center seating section, had about a 3 foot platform in front of it and curtains in cream and burgundy stripes about a foot wide. Years later, when the Balcony was subdivided, they did not cut it down the middle. On the right side, just about a third of the balcony’s width was sectioned off, using a tiny portion of the original projection booth that was the rewind/cutting room when I worked there in the 70s. It already had a tiny window in it and that’s where the projector throws from. I was in there once for National Lampoon’s Christmas Vacation, (1989) and was surprised that they fit a projector in that small space. I imagine the platter for it is in the main area of the booth, where the Projectionist’s Viewing window was. At that time i believe the two bottom rooms and the two side rooms had not been added yet.

The main auditorium got its own booth in the 1972 split. The downstairs booth was in the back of the center section, and went from the left center aisle to the right center aisle, and from the lobby wall to the edge of the balcony.

Two additional screens occupy the back of the main house, going from the left center aisle to the left wall, and from the right center aisle to the right wall. Both rear rooms extend past the Balcony overhang, one almost halfway to the main screen, the other not so much. Both have projection booths in the rear, that throw to screens toward the front. I would not be surprised to learn that the original seats are still in their original locations within the two back rooms, however since these rooms go straight to the wall on both sides, that means there is no longer access to the wall aisles of the main house from the lobby. It is very likely that a couple extra rows of seats were removed from the rear of the left and right sections of the main house to allow access to the wall aisles.

The last two screens are in an addition built onto the side, occupying about ¼ of what was an unpaved parking lot for as far back as I can remember.

Sound has been upgraded in the main house by simply hanging speakers on the walls, but the original screen (still tilted backward from the early days when the projector was upstairs) has not been upgraded or even touched, nor have the two sets of stage curtains been used in years. The mechanism for the rear stage curtains had broken by the time I worked there, so all I had to work with was three switches: front curtain, house lights and footlights. There were no dimmers upstairs or downstairs. I’m told the front curtain hasn’t been used in about 20 years.

VERY nice explanation. I got the full picture of how the division is now.

Thank you Geo. I’ve got friends who still live there, and quizzed one extensively about the place. Also have some feelers out for pictures of Schine’s Oswego Theatre and the late Carrols' Oswego Cinema.

I’d love to hear from someone who has been in the Oswego Theatre lately, to see how accurate my description was, and what the new attached screening rooms look like.

Meanwhile for info about lost Syracuse area theatres, the Kallet Genesee and Kallet Shoppingtown, check out www.CinemaSightlines.com Neither theatre is listed on CT, but the Syracuse community is still mourning the Kallet Genesee, it was a recent topic in the letters page of the Post Standard.

Just had a nice talk with the owner, who seems to be interested in taking care of the place, and has made an effort to match the character of the original design with the alterations. Some of my guesses were correct, others were not. I’m told all the seats are new, which is a great improvement. I’ve learned elsewhere that the theatre is now capable of running 70mm on the main screen, in the rare event a print was available. Back when I worked there it was all 35mm and there were no dimmers or stereo sound, so obviously some upgrades were made. It is nice to know someone has spent some money on fixing up the place. I am working on setting up a photo shoot for sometime soon. Considering the fate of the Genesee, we’re all lucky this owner has a definite interest in keeping a nice theatre.

Nice to know that the Oswego is in good hands and someone is willing to properly care for the place. I know what it is like when a theatre gets in the wrong hands, the end results are usually hurtful for the theatre, the town, and all those that had high hopes that their theatre would be around for all time.

Perhaps movies will stick around a bit longer in Oswego. Still, I will keep a close eye on the place.

I wish my wife would think differently about moving because I really would have loved to go to Ohio and snatch up the Norwalk.

You’ll find some recent photos of the theater in our blog entry “Deco Still Lives” (http://oswegofilmgroup.wordpress.com/2009/08/05/deco-still-lives/)

In 1910 the Hippodrome Theatre is listed in the city directory at 138 W Second Street. It must have preceded the Oswego Theatre and subsequently have been demolished to make room for the new theatre.

The May 31, 1941, issue of Motion Picture Herald featured a page of photos of the Oswego Theatre.

Additional photos appeared in this ad for the Formica company.

The splash panel over one of the Oswego’s two drinking fountains can be seen at the upper left of this page of the magazine.

A view of the Oswego’s auditorium can be seen illustrating an article about theater seats on this page of the same magazine’s May 3 issue.